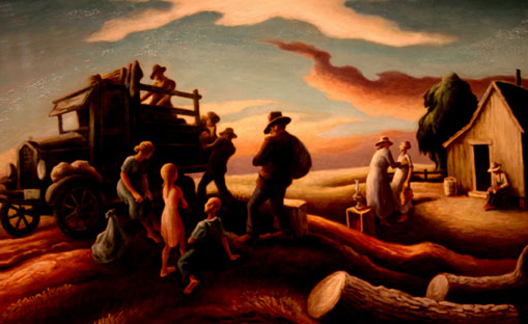 Plate 1. The Departure of the Joads

This egg tempera and oil painting was created by Missouri artist Thomas Hart Benton in 1940. The art was commissioned by 20th Century Fox to advertise their film production of John Steinbeck’s novel, The Grapes of Wrath. The rugged depiction of form is typical of Benton’s unique regional art.

The original painting hangs in the Ralph Foster Museum. Be sure to visit the museum when you get the chance. The archives are incredibly extensive (they don’t call it the Smithsonian of the Ozarks for no reason!).

from the Ralph Foster Archive

Benton was named for his great uncle, Missouri’s first senator. 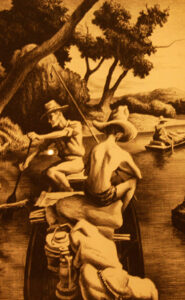 plate 2. Down the River (also titled “The Young Fisherman”) 1939,
This is a scene on the White River in the Ozarks. Drawings from this lithograph were made while ona float trip. The area presented is now under 75 feet of water, due to the construction of Bull Shoals Dam. However, such scenes are still common on the clear Ozark rivers which remain free flowing. The boy in the picture is Benton’s son, T.P.

Benton’s first mural was painted (at the age of six) on the stairway wallpaper. At 17, he was drawing cartoons for the Joplin Missouri American. In 1907, he went to Chicago to study at the Art Institute. At the age of 19, he set off for Paris to study; however, in the end he returned to Missouri, convinced that the best subject matter was his native country.

He is best known as a muralist and his works may be seen in the New School for Social Research (New York), the University of Indiana (Bloomington), the Jefferson City State Capitol and the Truman Library (Jefferson City and Independence, Missouri. respectively), as well as locations in New Britain (Connecticut), and Niagara Falls (New York).

He last work was done for the Country Music Hall of Fame in Nashville.

Thomas Hart Benton, who passed away in 1975, reached a pinnacle of fame as an exponent of regional painting. He is assured a permanent place among America’s greatest artists.

Ralph Foster Article reprint — The staff of College of the Ozarks’ Ralph Foster Museum has graciously allowed the reprint of this article from their archive.