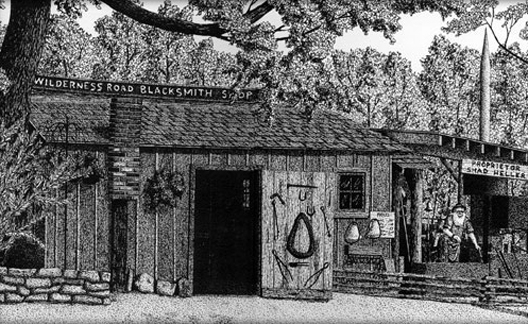 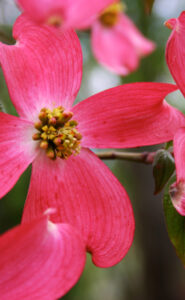 Unique. There is something unique about our perception of blacksmithing.

As Buddy Ebsen noted (below), the blacksmith was “one of the most essential of all the pioneer craftsmen.” Perhaps that is why it figures so predominately in American culture of the 19th century.

And while the art was ubiquitous in pre-industrial America, it has become something of a symbol of the Ozarks, both in literature and in history. 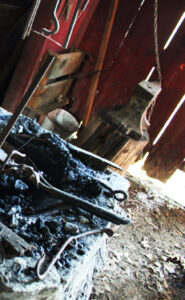 Under the spreading chestnut tree the village smithy stands;

The smith, a mighty man is he, with large and sinewy hands;

And the muscles of his brawny arms are strong as iron bands.

Week in, week out, from morn til night, you can hear his bellows blow;

You can hear him swing his heavy sledge, with measured beat and slow,

Like a sexton ringing the village bell, when the evening sun is low.

And children coming home from school look in at the open door;

They love to see the flaming forge, and hear the bellows roar,

“I felt Irene grab me by the arm as she yelled, ‘Buddy! Look at that blacksmith! His beard’s gonna catch on fire!’

“We Beverly Hillbillies were getting our first look at the Ozark Mountain location where we were to start filming the following morning.

“It was Silver Dollar City, an authentic reproduction of an 1890 mining town located in Southwest Missouri within sight of Arkansas.

“They were holding their annual Craft Festival, an event dedicated to the preservation of the pioneer skills which had enabled our ancestors to carve this country out of the wilderness.

“It was part and parcel of our story to show some of these artisans at work building every thing from log cabins and prairie schooners to oak barrels and hickory rockers.

“Since the blacksmith was one of the most essential of all the pioneer craftsmen, we had a scene with Shad Heller.”

THE RISE OF THE WEST 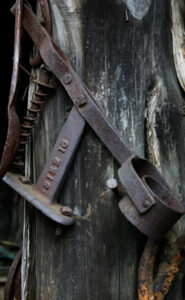 “The workmen who satisfied this demand were blacksmiths, many of great skill in making tools for house and farm works, and some — such as gunmakers and clockmakers — were master craftsmen.

Even the frontier ax, in the hands of the skilled, was a tool of versatility and marvelous effectiveness. However, in this there was no special relation to the western frontier, for the needs were everywhere the same, and likewise the role of the blacksmith.

What might be called manufacturing for a market seems to have begun about 1790 in western Pennsylvania. The second most important demand was for nails, wire, crowbars, and other simple tools. 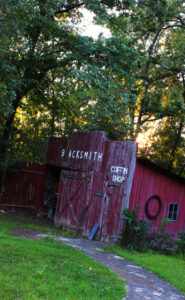 Furnaces for the casting of cooking pots and the like, and for the production of wrought nails and tools, existed in Pittsburgh, Lexington, and then in Ohio in the early years of the century.

They were, however, extremely few. Cincinnati had no foundry in 1815, nor had St. Louis any in 1821. Blacksmiths were still making kitchen utensils.

After the discovery of large and rich iron deposits in Ohio and across the Ohio River in Kentucky in 1825, the industry greatly expanded. Pittsburgh had become a great iron center before 1830, and Cincinnati and several lesser Ohio towns became moderate producers.

“So I went horse-hunting and wound up making a dicker with an Indian. He had two appaloosa horses and he dearly wanted a .36-calibre pistol I had, so we settled won to outwait each other. Every boy in Tennessee grows up horse-trading or watching horse trades, and no Red Indian was going to outswap me.” — Louis L’Amour