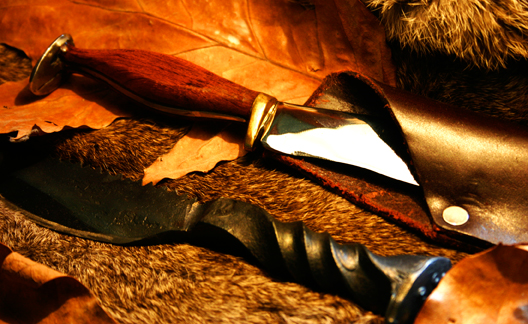 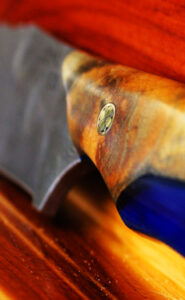 Like fire and ice, the beauty of a hand-crafted knife captivates the imagination. An age-old art, knife making hearkens of generations past. Knives are essential tools, yes, but they are also powerful weapons. US Special Forces — in Afghanistan, Iraq, Somalia, Grenada, Vietnam, Korea — have all relied on knives. 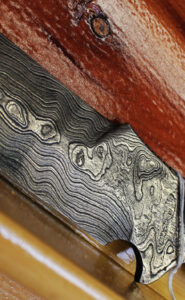 Knives are elemental to our national heritage — and to the Ozarks. From mom’s butcher knives to Granddad’s pocket knife to the intimidating Arkansas toothpick, knives represent our culture, our independence, our campaign for self-defense, our respect for hunting and fishing— and a salute to the fighting men and women of America. 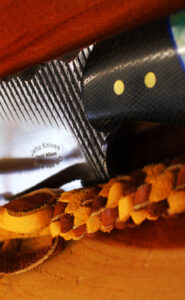 Most knives these days — especially those from big box stores — are mass-produced in Japan, Korea or China. Made of stainless steel, they are a product of industry, made by a machine, sharpened by a computer.

In contrast, there are yet a number — and in the Ozarks a handful — of talented craftsmen dedicated to the millennia-old art of knife making. 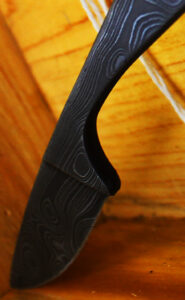 “When you buy a custom, handmade knife, you are buying a knife that someone has put a part of themselves into,” says David “Davy” W. Wilson II of Jehu Knives (Hollister, Missouri). “The piece of steel you hold in your hands? Many, many hours went into that knife you hold. My average time on a knife is 20 to 30 hours but I just finished a knife for a young man (it was a graduation gift) that took close to 40 hours.”

State of the Ozarks took some time only a few weeks back to visit with Wilson — who handcrafts knives in conjunction with his father David Wilson I — and learn more about the craftsmanship process.

“Is there a guarantee on my knives?” asks Davy, laughing. “I guarantee the knife will cut you and it will rust if you don’t take care of it.”

“It is the carbon content that causes the steel to be strong and temperable. The carbon is what allows you to sharpen the blade. A lot of people talk about how stainless steel won’t rust. If you take a good stainless steel knife it will hold an edge for a time. But when that edge is lost, those knives are very difficult to sharpen. 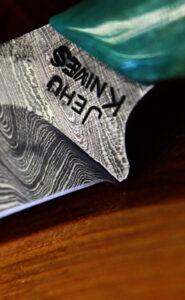 “The type of high carbon steel we use is 1095 steel; 5160, A2 and D2 are tool steels. The 1095 is also the same steel used to make saw blades and files. Those steels sharpen. The edges come up quick and will hold. And the knife will rust.

“If you treat a knife like you are supposed to, it will be fine. Don’t store the blade in a leather sheath. The leather absorbs moisture. Store the knife in a cool dry place — or display it. Wipe it down with oil occasionally. With moderate care, a hand made knife will last a lifetime.” 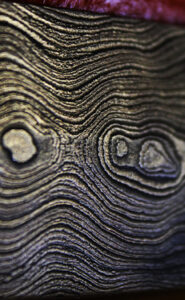 What are Davy’s steps in knife making?

Step One. Begin with a billet of Damascus steel. Draw out the design and then cut out the shape using a metal band saw. After the outline is cut, I grind the basic angle and get the sides ground out.

Step Two. The blade is put into a vise and a chainsaw file is used to cut the pattern and de-burr the edges (the finger groove cannot have any sharp edges). I drill the holes for the handle pins at this point as well as other holes in the handle portion of the steel to let in more epoxy. 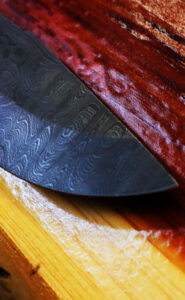 Step Three. I heat the blade, getting it hot enough to turn the steel orange (the metal stops being magnetic at this point). Then the blade is stamped with the Jehu Knives maker’s mark and quenched twice.

Step Four. The first quench is seven seconds. The blade is drawn out and checked to see if it is drawing to one side or another. If it is straight, I drop the blade in the oil. The blade has been hardened.

Step Five. After the second quench, I wipe off the excess oil and take the blade to the scotch-brite wheel to buff away any excess carbon. Then we put the blade into an acid bath which etches away the surface and reveals the layers of Damascus steel. 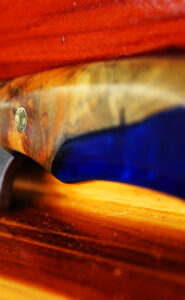 Step Six. After the acid bath, the blade is washed in baking soda and water and then put in the oven at 350°F for one hour to temper the steel to a Rockwell hardness of 54-58 (a stainless steel Buck knife is about 64-66). Our blades are easier to sharpen but still retain an edge.

Step Seven. From the oven, the blade is blued with gun blue from tip to hilt to inhibit rust, then soaked in gun oil overnight. The handle is then prepped with an alcohol wash.

Step Eight. I glue on the fiber spacers and set that up to dry. Then clamp the knife down, drill out the holes and glue on the bone. Once that has been clamped, I drill through the holes in the steel, run the pins through and cut the mosaic pins out. The pins are dipped in epoxy, pressed through the handle, and the knife is left alone.

Step Nine. After the epoxy has set, I take the knife to a belt sander with 150-grit paper and work the excess off until the handle just feels right. The sanding is tedious. Blocks, paper, and wet sanding are all used. For example, if I use stabilized box elder which is really hard, the sander just burns the handle. I have to use hand files, then Dremel tools at low speed, then hand-sanding.

Step 10. Once completed, I take the finished knife to my wife, my dad and my brother and let them handle it. We pick apart the design and I address those issues. Then I put the edge on the blade with 400-grit paper on the grinder. The cutting edge is ground in usually with only two swipes. The finishing touch is a soft buff to reveal the silver and giving it to my dad. He hits it with his pair of crock sticks. 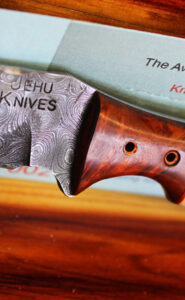 At that point, the knife is ready to sell.

As a relative newcomer to the blade smith community, Jehu Knives command $250 to $400 per finished piece. Long-time Ozarks knife makers such as Tom McGinnis of Ozark produce few knives under $1,000.

Big-box store products these are not.

No, within each knife is a lifetime of craftsmanship — irreplaceable skill and heart, power and desire — the very soul of its creator. A knife that will last a lifetime.

“Ahead of the invasion fleet went three boats containing Imams. They were clad in dark robes, and they were pronouncing to the Faithful that this was a Jehad, a Holy War. Behind them again came boatloads of Moslem chiefs, Turks, and Algerians, dressed in rich silks, ornamented with gold, silver and jewels. They wore elaborate gem-set turbans on their heads and in their hands were ‘scimitars of Alexandria and Damascus.’”

“Well, I just looked at him. Where was he raised? Nobody would rob a pack peddler, but especially not this one. Anyway, even among Injuns, peddlers an’ traders were respected an’ let be. We all needed their goods. If the peddler stopped comin’, we’d all lack for things.

“‘Nobody would rob the Tinker. I reckon nobody could. He’s got him a special kind of knife he makes himself and knows how to use it. I often wished I had one like it, but I have to make do with my pick.’

“‘Arkansas toothpick,” When I said it, I could see he was ignorant. ‘It’s a kind of knife.’”

“No hillman would think of giving a steel blade to a friend — such a gift is sure to sever their friendship. Whenever a knife changes hands, it must be paid for, even if the sum is merely nominal. I have see a salesman, a graduate of the University of Missouri, present his son with a valuable hunting knife — but he never let it out of his hand till the boy had given him a penny.”

“He came in silently and sat back under a dark tree and Sorrel came to him with the figures. The figures were bad. Longstreet sat with his back against a tree and out in the open there was a party, sounds of joy: George Pickett was telling a story.

“He was standing by a fire, wild-haired, gorgeous, stabbing with an invisible sword. He could tell a story. A circle of men were watching him; Longstreet could see the grins, flash of a dark bottle going round. Off in the dark there was a voice of a young man singing: clear Irish tenor. Longstreet felt a long way off, a long, long way. Pickett finished with one mighty stab, then put both hands on his knees and crouched and howled with laughter, enjoying himself enormously. Longstreet wanted a drink.”