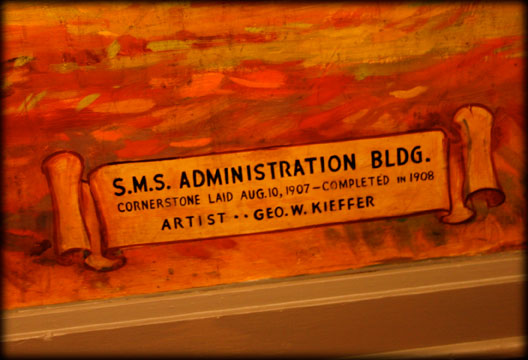 The George Kieffer Murals of the Fox Theatre

In the old Fox Theatre — the Abundant Life Covenant Church since 1985 — on the Springfield Square, a series of murals celebrating the history of Springfield, Missouri, are displayed.

The murals are the work of George Kieffer and each demonstrate his craftsmanship, his care of the art and the subject matter, and of his favorite season, autumn.

First is the administration building of SMS, a structure still standing today. “Cornerstone laid Aug. 10, 1907 — Completed in 1908” says the title, blocked out in an exquisite, hand-painted type: Artist… Geo. W. Kieffer (Plate 1). The broad brush strokes, the overlays of reds, rusts, yellows and greens, the almost-Impressionism style, are undeniably Kieffer.

The administration building is remembered in idyllic form. Cottonwoods and maples frame and shelter the new building. Young folks in period dress are comfortably settled in the surroundings. There is no sign of city (or even of other structures) in what is now the bustling quad of Missouri State University.

Higher learning, nestled in the wooded fields of the Ozarks (Plate 2).

Next, the Battle of Wilson’s Creek (Battle of the Oak Hills) is recalled. Confederate riflemen — directed by a cavalryman brandishing sword and nearly obscured by smoke (Plate 3) — attempt to block blue-coated Federals forming in brutal lines beyond the creek (Plate 4). Simple colors, strong lines. An overturned tree, roots sharply extended, adds turmoil while those characteristic reds, rusts, and greens reflect in the water. Many figures are merely hinted, not defined. It adds to the sense of ghostliness and of anger. Here, reds are not merely accents for tree branches. They form limbs, blood-soaked bandages, ruddy foreheads, contrasting face against field.

Is it historically accurate? Not likely. But a powerful scene remembering an epic battle nonetheless.

Last of the trilogy, the Stone Chapel of Drury University rests in nostalgic splendor amidst a balmy autumn afternoon (Plate 5). Crimson Virginia creeper frame important features of the chapel. Blues and grays dominate in the stonework and sky. The clock tower is a study of angles and brief shadows (Plate 6). From the lower left, a contemplative figure surveys the church. A young couple in period dress walk toward the door.

It is the oldest stone structure in Springfield, named, ironically enough, for wealthy benefactor Valerie G. Stone of Malden, Massachusetts, rather than for its building material. The cornerstone was laid on November 16, 1880 (although a severe fire would halt construction and the chapel would not be completed until 1893).

Were it not for the efforts of A. Wilson Phillips, pastor and bishop of Abundant Life Covenant Church, it is quite possible the murals would not have survived to the present day. In the early 1980s the Springfield square was closed to through traffic and was a “blight on the community,” notes the church’s senior pastor, Ben Davis.

Back in the early ’80s, critics opposed the idea of a church downtown, believing it would slow revitalization:

“[Downtown Springfield Association] members believe the church group does not blend in with the atmosphere redevelopers are trying to create on the square with offices, restaurants, bars and small retail shops. The editorial staff of the Springfield Leader & Press supports this view,” noted Phillips in 1985, countering, “We plan to do extensive refurbishing and remodeling to make this building a credit to the downtown Springfield development projects.”

In the end, Phillips won out.

The historic Fox Theatre — first opened in 1916 — was lovingly restored by Abundant Life Convenant Church. The murals are safe. Today, art-goers are regularly invited into the stately lobby to appreciate Kieffer’s work. Despite belief of the contrary, progress can be a great thing.