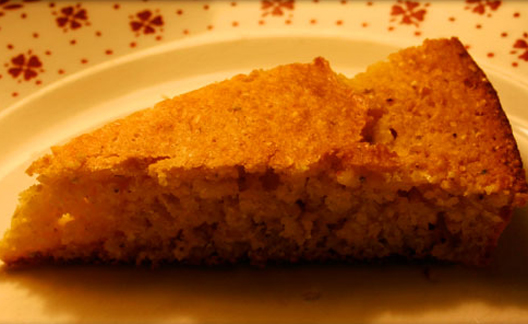 You wouldn’t think that a simple cake — and it is more of a cake than a bread — would garner so much attention. Or come in so many varieties.

A staple of not only the Ozarks but rural America of a generation ago, cornbread is part of our cultural heritage.

There’s Yankee cornbread, heavy with eggs, butter, cream and often, copious amounts of sugar. Truly a cake if there ever was one! Recipe is below.

There’s cornbread crumbled in a tall glass of cold milk as the evening meal after a hot summer day.

Fresh, hot cornbread, topped with butter and a generous helping of sorghum molasses.

Or cornbread smothered in ham and beans on a cold, January night.

War Eagle cornbread is an excellent example of the Southern version.

The recipe calls for just a small amount of honey for sweeten’ and bacon fat (or shortening).

Use bacon fat and a cook the cornbread in a cast-iron skillet. The difference is worth it.

Also make sure you have plenty of real butter and some good sorghum on hand when you get it out of the oven.

You’ll be tastin’ a very fine bit of history.

Many thanks to the staff of War Eagle Mill, Rogers, Arkansas, for their gracious permission to reprint this recipe.

War Eagle Mill is a fully working grist mill on the War Eagle River. It is also home to a fall craft fair of extraordinary proportions.

Pour into a well-greased bread pan, bake for approximately 35 minutes or until center crust cracks open and browns and toothpick inserted in center comes out clean.