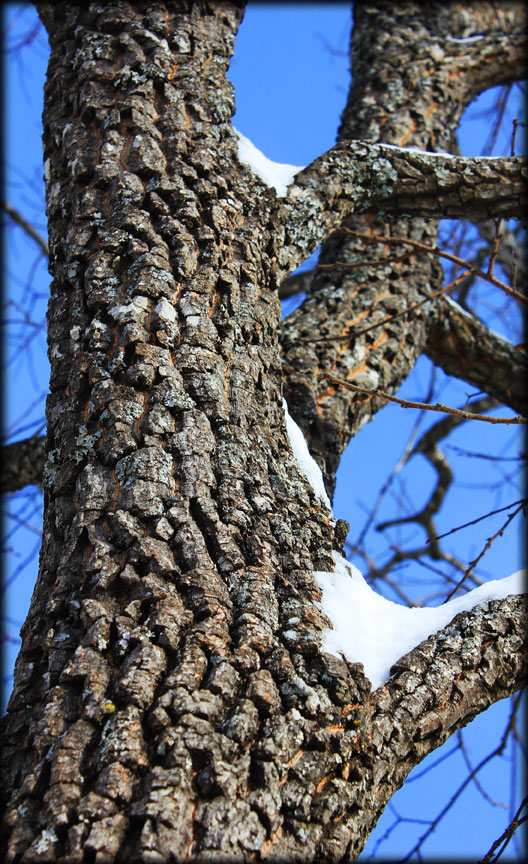 It was a persimmon snow that fell heavily across the Ozarks just prior to the 72nd anniversary of Pearl Harbor Day. Branson tourism came to a stormy halt as the week’s previously balmy 70-degree temperatures were replaced by icy winds and a “wintry mix” that ultimately dropped nearly a foot of snow across the mountains. No quaint almanac peppered with images of old Roman gods or fancy meteorological number-crunching data could have predicted this snow better than the unprepossessing persimmon seed.

Sliced into halves, many persimmon seeds throughout the Ozarks this fall showed a “spoon,” indicating soup weather and plenty of snow to shovel.

And shovel snow we did. When the torrents of snow finally stopped, a momentary bout of high pressure brought subfreezing nighttime temperatures and a beautifully clear sky early the next day. This gallery records a few, fleeting moments of that morning — the Ozarks’ first persimmon snow of 2013.

PLATE 2. Wild raspberry leaves (Rubus strigosus) shine through after the storm, a joyful splash of color (and reminder of a brilliant fall) amid a landscape gone suddenly white.

PLATE 3. A small pond hidden within a quiet cedar grove would, in summertime, be smelling of mud and serve as little more than a breeding ground of mosquitoes. In winter, it is transformed into an artist’s icy palette of blues and whites. One is reminded of Celtic mythology’s enchanted pools — thin places through which one may reach a magical Otherworld.

PLATE 4. The branches of oak trees in a fence row make weird, sky-like patterns of cornflower blue against the white.

PLATE 6. A rust-colored, sedge-like grass, spiky and suddenly dramatic, is framed by winter.

PLATE 7. Seemingly delicate, a pin oak (Quercus palustris) leaf lies dusted with frost and lit by the morning sun, a poetic afterthought of both wind and storm.

PLATE 8. Dark and icy tones of shadow and frost give easily overlooked woody stems and still-green grasses a menacing tone — a surreal peek into an odd world seemingly existing just out of sight.

PLATE 9. Old fence row and tangle of cedar and elm create shadows of interest — coupled with surprisingly warm light — across a landscape normally considered plain and easily passed by.

PLATE 10. Feathery and fern-like ice crystals trace across dry stems in this detail. The intricacy gives emotional meaning to old, 19th century stories of Jack Frost and even older Northern European folklore from Germany and Scandinavia.

PLATE 11. Not the brush of angel wings but rather those of a tufted titmouse or chicadee seeking grass seeds on a cold morning leaves the delicate imprint seen in the upper left portion of the photo. Not heavy enough to penetrate the snow, snowbirds scratch across the powder, leaving only ghostly impressions.

PLATE 12. Possumhaw brightens the sky. The posssumhaw (Ilex decidua) is a food source of birds and one of the most beautiful Christmas decorations you can hope to find in the Ozark woods, especially when framed by white snow set against a brilliant blue.

PLATE 13. Deep beneath the cedars, soft, curving lines of shadow and snow combine. It won’t be long before this pristine blanket is marked by tracks of deer and rabbit searching for food.

PLATE 14. A cold yet brilliant sun penetrates a cedar glade, made mysterious, magical beneath the snow-laden branches. Thoughts of C. S. Lewis’ Narnia and a bewitching but harsh and endless winter arise.

PLATE 15. An almost-lunar landscape, painted in shades of blue and ice, sparkles while outlining the shadowed, drifting footprints of another.

The scene above (PLATE 15) is universal within certain latitudes. There is nothing inherent within the photo to indicate the Ozark Mountains. And yet it is that very universality which gives such images their power. Visual moments like this one, fleeting as they may be, have been traced throughout our history, from when hunting men first plunged into a mountain snowstorm to the last time a toddler fell headfirst into his first drift. Both loved and hated, snow is a powerful image-maker and ancient herald of an at-times drastic and vivid season.