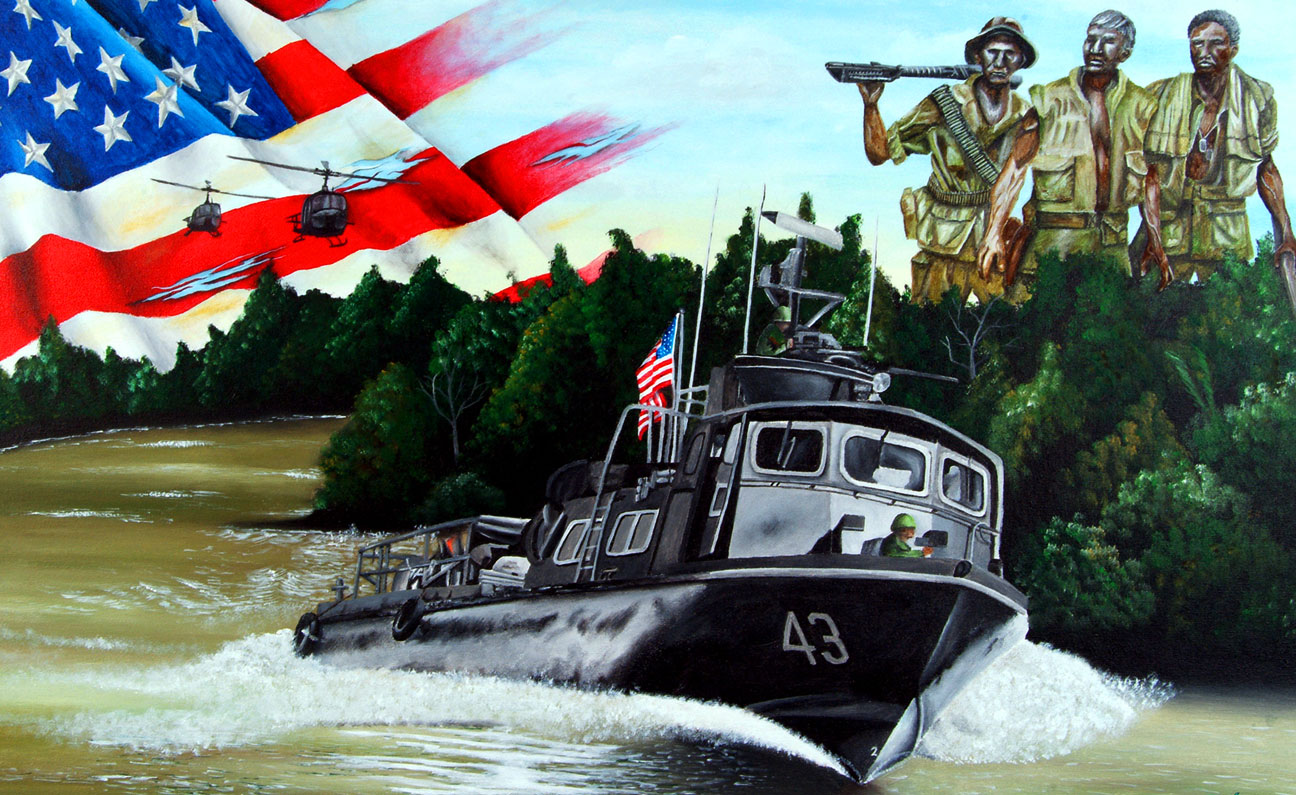 The mission was code-named Silver Mace II. The day was April 12, 1969, and the United States was at war in the mangrove swamps and rice paddies of Vietnam. Songs like Hey Jude by The Beatles and Mrs. Robinson by Simon & Garfunkel blared from the radio alongside Jeannie C. Riley’s Harper Valley PTA and Hank Snow’s Hula Love.

And a young generation of American warriors were stepping into history.

In the South China Sea, just off the Vietnam coast, the morning dawned in “the mellow radiance of the silvery west,” as later recorded by Lieutenant J. G. Peter N. Upton, member of Underwater Demolition Team 13.

The lumbering USS Westchester County, a nearly 6,000-ton landing ship, was stationed near the mouth of the Deong Keo River, support for a flotilla of swift boats.

Designated PCF for “patrol craft fast,” these 50-foot aluminum boats were the mainstay of US and South Vietnamese forces in the war-torn nation’s inland waterways. Originally designed as “water taxis” to service oil rigs in the Gulf of Mexico, PCFs were formidable when loaded down with three 12.7mm machine guns, an M60 machine gun and an 81mm mortar. Twin General Motors marine diesel engines churned out 480 horsepower each. The boats had a top speed of 21 knots with a range of 366 miles.

Loaded down with South Vietnamese marines, gear and explosives, the mission was simple enough on paper: 13 boats enter the Deong Keo River and proceed, single file, until a point determined by the Vietnamese company commander (and his US advisor). Under cover of the flotilla’s gunners, the Vietnamese marines would disembark.

The Viet Cong were waiting.

Not five miles upriver, a well-armed guerilla force lay protected behind a bunker and trench at the water’s edge. Waiting until as many boats as possible were within the kill zone, the Viet Cong opened up with claymore mines, machine gun fire, rifle grenades and bazookas.

The last boat in line, PCF 43, was hit with a claymore mine, 75mm rifle fire and three rockets. The blasts mortally wounded the officer in charge and killed a demolitions team member. Out of control but with engines roaring, the swift boat beached on the mangrove-choked riverbank directly beneath the Viet Cong bunker.

PCF 38 turned back to save the stranded crew but was hit by two rockets and forced to retreat.

Survivors fought to regroup and keep their position from being overrun. The stricken swift boat became a battleground as heavy fire was exchanged. Minutes ticked by and ammunition dwindled. Recordings of radio traffic, punctuated by the sound of chopper rotors and gunfire, convey a small portion of the hell that took place on that riverbank.

“Forty-three is high and dry one mile back.”

“Provide cover for them, over.”

“We have to have stretchers.”

“Provide cover and we’ll get in to get ’em.”

A member of the underwater demolitions team remembers, “I was on 43 when she got hit. I remember the boats coming back into the kill zone to get us. We were out of bullets. You guys saved my ass.” — CW04 USN (Ret) UDT 13.

Before the Viet Cong guerillas converged on the men in the water, Sea Wolf 14 and 15 (two Huey gun ships) roared overhead, laying down cover fire. A broadside of rockets and M60 machine gun fire from the helicopters breached the bunker and trench. Beneath the cover of air support, PCF 31 pulled in to rescue the survivors.

PCF 43 was left a blazing wreck. Of the 17 on board, two — Don Droz and Robert Worthington — were dead. Twelve more — including Wayne Langhofer of Herington, Kansas — were wounded. The survivors were ferried to a MEDEVAC perimeter where they were loaded into dust-off helicopters.

And there it is easy to end the story. A moment of time. A bloody engagement in a faraway nation. A war we never wanted. Veterans would return home only to be cursed. Troops were told to change out of their uniforms before walking through airports.

Young men, unprepared and traumatized by the horror of war, buried the disgrace and tried to cope with domestic life despite post-traumatic stress disorder. Overarching decisions made by politicians and generals became a silent, personal war in the hearts and souls of American veterans and their families.

It was a time of war. A time to defend America against all enemies, both foreign and domestic. Our fighting men and women served with honor.

The Story Behind the PCF 43 Artwork

Clotfelter notes, “There are certain paintings that I do that one cannot begin to express the honor and the privilege of doing them. I can never give enough thanks and gratitude for those who have served our country like W04 Langhofer.”

“When I first talked to Raine, I wanted to do something for [Wayne Langhofer],” says Stover. “My original plan was to present the painting to him at the Veterans Day celebration in Herington. But I grew up with his wife too. We all agreed it would probably not be a good thing to do in public. Wayne is not a see-me guy. So we did a private deal at his house.

“Raine and I have been friends a long time. I knew Wayne had a picture of the riverboat in his basement. I asked his wife if she could get me a copy and I asked Raine if he could do up an oil painting.

“Life expectancy on a swift boat was similar to that of a chopper pilot. It wasn’t very good.

“I’m not a political guy but I don’t like it when people who have never served are the ones pushing guys into stuff. I don’t think they understand the long-term effects. Wayne was diagnosed with PTSD and it’s for real. He still goes to the VA once a month. He won’t open up about it [but he has said] he still wakes up in the middle of the night with a VC in pajamas at the bottom of the bed.

“You think about that. That’s been since ’71. I used to mistakenly say, ‘After so long, you need to get over it.’ He told me one time, ‘Unless you’ve been there, you don’t really know.’”

Smokey Stover served in the US Navy from 1967 until 1973 as fire support aboard the guided missile destroyer USS Berkeley and aboard a destroyer tender. Afterward, he served 37 years in the fire department before retiring to Cassville. He remains active in helping fellow veterans and is a regular at Branson’s veterans task force / homecoming events.

“Places like Branson are places of healing. I think the town has gone over and above. Now we have all the guys coming back from Iraq and Afghanistan and who knows where we’re gonna send guys next.

Since 2004, it is difficult to discuss Vietnam swift boats without embroiling Langhoffer in the John Kerry / Swift boat controversy. “Wayne is a personal friend of John Kerry,’ notes Stover. “He served with Kerry and he campaigned for him.

“Wayne has had people confront him about the Swift boat thing and Wayne’ll tell them straight up, ‘I was there. I know what happened. What you’re gonna print is probably different than what I’m gonna tell you. John Kerry earned what he got. He was a good commanding officer.’”

Mwweb.com/ndc/SwiftBoats/pcf43.htm, The Death Of PCF 43

PFC45.com, Patrol Craft Fast — A Tour on Board a Swift Boat, Vietnam