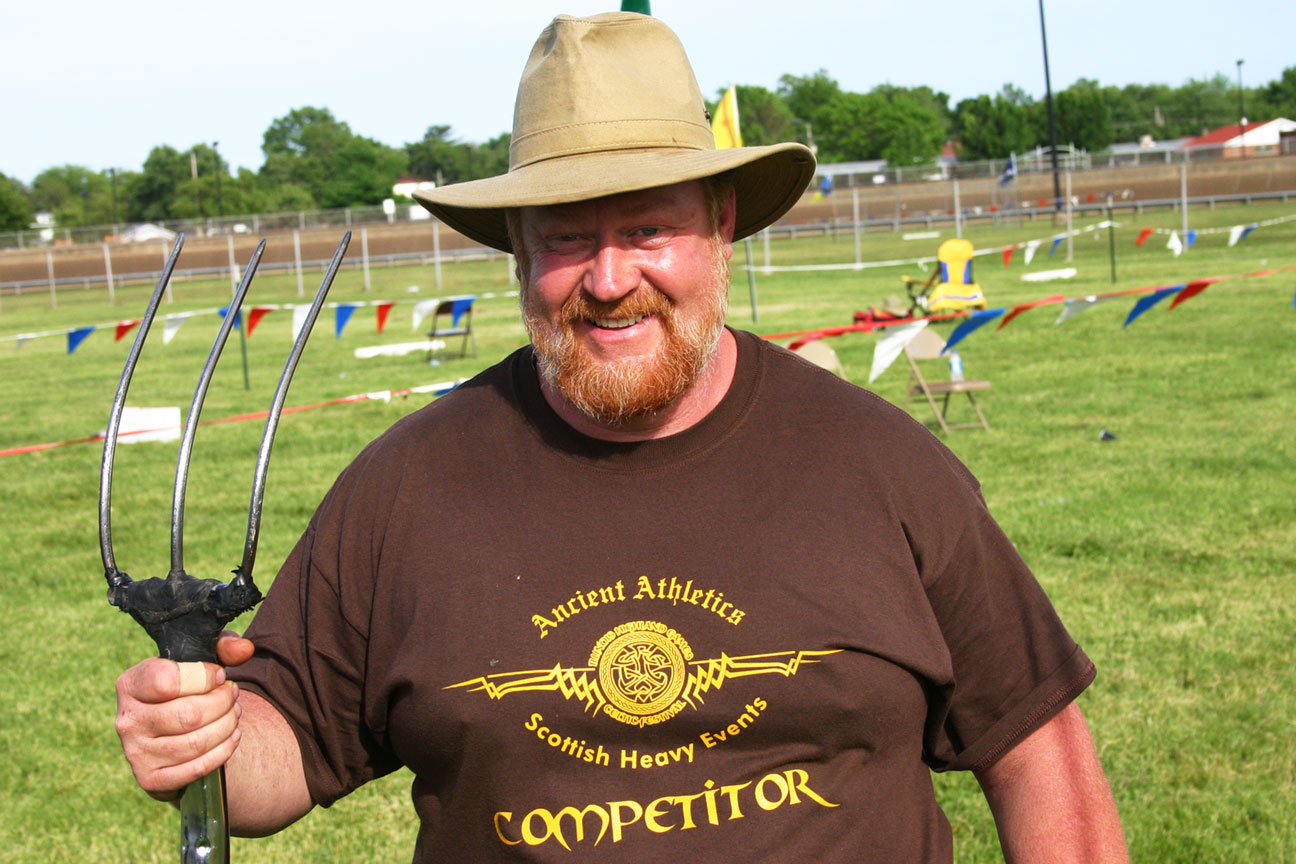 Irish Games in the Hills

I suspect more than one exasperated hillbilly has — unknowingly — participated in the old Celtic games of strength.

The necessary components are at hand. First, there are plenty of stones for throwing. Second, there are a great number of Irish and Scotch families in these hills. Third, trying to grub a living out of these old, rugged hills can be one of the most exasperating jobs ever put on a man. I also suspect a mule was regularly involved.

And Irishmen, when pushed beyond patience with an abundance of stones nearby, are likely to pick those rocks up and throw them just about as far as can be done, oft-accompanied by a reasonable degree of colorful language.

Who knew it could lead to a cultural re-connection?

"Just look for the burly redhead..."

“Just look for the burly redhead in the tan hat.” That was the only advice I had as I headed to Springfield, Illinois, on Saturday to research the ancient Celtic games.

The burly redhead turned out to be Merl Lawless of Springfield, a master of the ancient Celtic games of strength. Soon to be competing at the sport’s highest level — the Master’s World Championships in Inverness, Scotland — Merl is passionate about his sport and about the exceptional accomplishments made by the Springfield group.

His passion is well-warranted.

Something striking about the day’s events was the tone of the competition itself. In the midst of an incredible showing of strength and force of will was a level of camaraderie and humility rarely associated with top-level athletes. If you have the chance to attend one of these games, be sure to do so. It’s truly a magnificent sport and great way to preserve our Celtic heritage.

Originally published on MidwestIrish.com by Joshua Heston, editor, MAY 22, 2006

I really knew nothing about the games or the culture until I was at my daughter’s soccer practice, bored, throwing a discus and shot put just to make up the time waiting for her to get done. And I ran across a couple of guys throwing the Scottish hammer. I was intrigued by that. They waved me over and asked if I wanted to give it a try and I was hooked the first throw.

I just loved it. You know, part of the spirit of competition comes back when you watch your child compete. And being in my forties was when I found out about the Games, and it sparked a whole new interest in things. And I realized that to throw in the Games, you had to practice — and what a good reason to get in shape!

So it all made sense. I sat behind a computer for a couple of years with the new division in our company and was itching to do something. So I jumped in head first and I’ve loved every minute of it.

I’ve been competing for six years now. I went from a beginner in the sport to next month [June 2006] competing in the Masters World Championships in Scotland. So that’s the pinnacle of my career in the Games — to finally reach that point. Just got our passport in today, so we’re celebrating.

The Games are in Inverness.

Part of the fun about this whole scenario with the Games is that you learn about your culture. You learn about your past. And you study your genealogy. And finding out about the history of the Games, [it] being an event that came along before the Olympics — it’s a thousand year-old sport. And as we progressed here, that became even more amazing to me. Because our club is so active in the Midwest — maybe in the country — we have six world records under our belt that have been broken in our group — in our Games. And when you think about a continuous running athletic event for a thousand years and we have a half-dozen records, that just blows me away.

[I’m] Scottish-Irish [in ancestry]. My wife’s more Scottish and I’m more Irish. One of my favorite shirts — on the back, it says, “Come be a Scot, even if you’re not.” So it‘s all about celebrating your heritage and looking at where you came from. My best buddy judging over here is a Greek — so we let anybody in!

I’ve done some research and what I found out was the Highland Games originated in Ireland. And a lot of people don’t like to hear that. But that’s what I have researched. And I can’t quote you exactly where I saw it, but I was surprised to read that. I helped a couple of high schools do some video taping and they just thought it was a cool thing to do a project on and so I did some research with them. We did a presentation and a video of the games — and those are some of the facts that I found out.

We’re all Vikings somewhere along the line. Everybody can celebrate it really. For me, personally, competing was everything. But I couldn’t help but help out with the organization and the planning of the events. I’ve been with a company 30 years that does trade shows and events and it just falls into place. So, unfortunately, my role is now athletic director. And I don’t compete on the days of the big games because there’s just so many things that can go wrong.

But getting out here with the guys — there’s just nothing like it. And to feel that — to feel your body really work hard. It hurts to throw these things. It physically is painful to push your body that way. But that’s part of the challenge. And you share that with everybody. I heard somebody once joke about “a thrower’s gene.” The first time you throw, you’re just hooked. I work out every morning trying to get stronger to throw. And it’s paying off. I went from a bench press of barely getting 250 when I was really trying hard a few years ago to 425 bench now. And it’s healthy! So all the things about it are good.

Plus, everybody looks good in a kilt!

It’s all about competition. And the way you grow from that. I think a thousand years ago it helped find out who would come to the top and who might have the abilities to lead and be strong for their group. And in our sense, we go from living everyday behind a computer to barbaric, mouth-slobbering athletic competitions and it just feels right! It’s in your blood.

We have a website called AncientAthletics.com. We do about eight events a year here and we celebrate the culture with the pipers and the dancers. We’re part of the whole thing, but our athletic unit does eight events of our own. And demonstration and just get-togethers and practice times.

We love to have newcomers. We have a novice division, a C division, then it goes B, A, super-A, and then when you turn 40 you get to be a master. And then those A-division athletes? They are masters too, so it’s a very tough group.
But we welcome new athletes and if you’ve never thrown before and you want to register and throw with us, all the other athletes are more than helpful in showing you what to do. You can always find somebody to practice with so it’s open. We encourage it. We have some training clinics sometimes.

But we can see it in someone’s eyes, when they throw for the first time and they say, “This is the coolest thing I’ve ever done and now I’ve got to keep doing it.”

A Poem by Ossian

Daughter of streams, that now art reared on high, speak to the feeble, O stone!

After Selma’s race have failed! Prone from the stormy night, the traveler shall lay him by thy side:

Thy wistling moss shall sound in his dreams; the years that were past shall return.

Battles rise before him, blue shielded kings descend to war:

The darkened moon looks from heaven on the troubled field. He shall burst with morning from dreams and see the tombs of warriors round.

He shall ask about the stone, and the aged shall reply, “This Grey Stone was raised by Ossian, a chief of other years!”