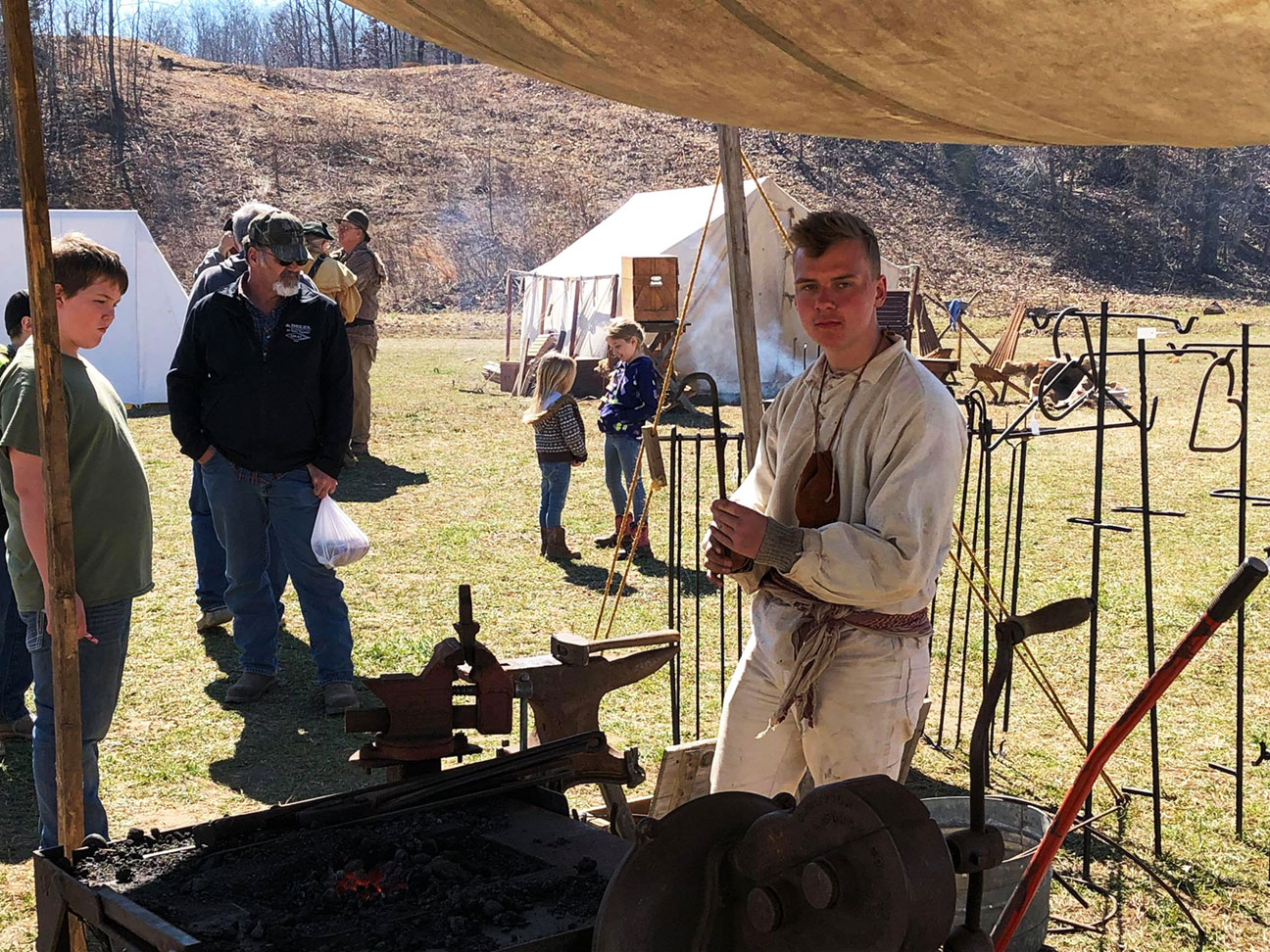 Remarkably I had not been able to attend the first and second Eastern Ozarks Rendezvous event at Barks Plantation in Glen Allen, Missouri, so this year I decided to pay them a visit.

Generally speaking, Ozarkians aren’t real interested in other peoples’ business and for the record they’re not apt to divulge their own. Billy was no different.

I introduced myself and asked if I could interview him. He was thinking about it but he had some questions of his own.

“Where’s this gonna be posted? What’s it for?

I told him it was for State of the Ozarks and that it was an online magazine which promotes Ozark culture past and present.

“Every year they host a festival in Hollister and that craftsmen, artists, musicians and authors along with those interested attend.”

“It attracts a wide variety of attendees. Everyone from the general public. Traditionalists and hipsters alike. The magazine has a large following and I try to work with them to promote our Eastern Ozarks.”

That was good enough and I seemed to check out for Billy. It wasn’t long before he granted me the interview. This was his third year attending the event but the first time he had camped.

Two Kentucky long rifles were on display along with impressive piles of furs and hides.

As it turns out Billy is a craftsman himself and was soon showing me some of his creations which included two knives. One was made out of a corn knife and the other with a deer antler handle.

Soon I heard the announcement for the shooting match, thanked Billy and bid my adieu.

Walking toward the gathering crowd at the far end of camp, one attendee got my attention, asking, “Want to try some of this funnel cake?”

“Yeah, it’s a recipe we got from the Mennonites but it’s missing something.”

“Well, it tastes pretty good to me,” I answer, thanking him as I make my way to the match.

A crowd had gathered. Instructions were given for the public with requests that they stay behind the rope and the line men (judges) went to their respective sides of the shooting lines. The first shooter who could accurately place enough rounds to cut the post in half is announced the winner.

It was then I met Prince and his owner. Prince is a Dachshund who was more interested in the match than posing for a picture. He finally relented and I snapped a shot of him “making small talk” before shaking hands with his owner and making my way back to camp.

On the way back to camp I ran into Billy again. This time he had brought a friend with him and we talked as if we were old friends.

“This guy probably broke his camera filming me,” Billy says.

As it turns out, John is from Marble Hill and I wonder why he and I haven’t crossed paths before. I asked for an interview which he readily granted.

Like Billy, John had attended the event the previous two years but this was his first time camping out. He told me he started making knives before starting to make the twisted rod hooks.

“I kind of did it backwards,” he tells me, indicating most people start with the rod hooks first as they are easier to make.

I thanked John for his time and made my way to the parking area across from the old brick plantation house. The old home, which has seen better days, somehow retains its stateliness.

After that, I spotted a small wooden footbridge crossing pond behind the barn. It was the perfect setting for a great photo. The only catch? I have to trudge across a muddy barnyard to get to it.

A small price to pay to get a great photo before I leave.

It’s a beautiful drive home and I take in the beauty of the foothills. As I wind my way through the hills, I got to thinking about the past. I wonder if mountain men ever made their way through the area.

Schoolcraft, in his journey through Southern Missouri and Northern Arkansas, passed just to the west in late 1818. Later came statehood. The Civil War and the rebuilding followed. The St. Louis Iron Mountain and Southern Railroad built its “Belmont branch,” bringing business and prosperity.

The remnants of these times still hang heavy in the air. There is the train tunnel (which no longer has tracks), the weathered plantation house, and of course, once a year, modern-day mountain men return to these foothills to rendezvous.