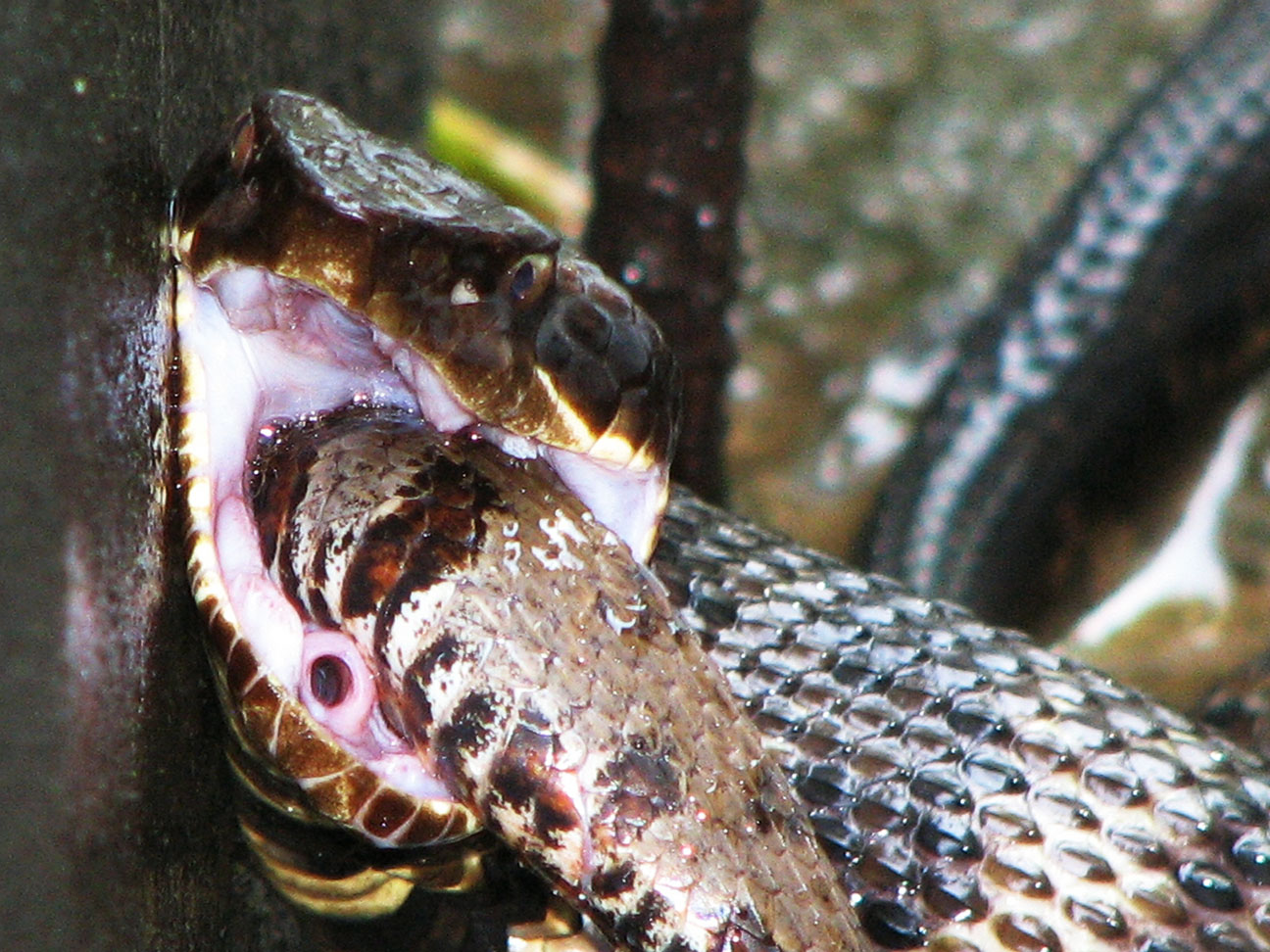 Editor’s note: the articles below have been challenged by several readers, calling Dale Grubaugh’s comments “misleading,” and “false.” While StateoftheOzarks respects many differing viewpoints, Grubaugh’s recorded experiences are just that: recorded.

An actual experience cannot be labeled “false” if it has occurred — and Grubaugh’s experiences occurred. His writings are presented here objectively.

For a more traditional herpetologist’s viewpoint on StateoftheOzarks, please see Ben Dalton’s article HERE. Dalton’s article serves as a companion piece to this one, allowing readers to compare experiences and make up their own minds.

Lastly, the excerpt of Vance Randolph’s is traditional folklore recorded in the 1940s. Randolph’s work is presented here for its historic and cultural merit but is not meant as an accurate viewpoint on any Ozark species.

StateoftheOzarks does not encourage the killing of wild animals but rather strongly encourages everyone to educate themselves about our fascinating native snake species. Ozark snakes are a crucial part of our ecosystem and most snakes of all species are far more afraid of us than we are of them.

This snake species, alongside the rattlesnake and copperhead, is one of the most well-known venomous animals of the Ozark hills. Although snakes in general have a bad rap, it has also become popular to portray the cottonmouth as benign, thus downplaying its danger.

Longtime residents of these hills tell a different story (see story by Dale Grubaugh, below). The Agistrodon piscivorus is defined as a semi-aquatic viper.

Cottonmouth water moccasins are very aggressive. They are extremely territorial — particularly so if they have young.

If you invade their territory when they have young, you will be attacked. But for the most part, cottonmouths are very reclusive.
Cottonmouths are the only water snake that will float on top of the water. That is one of their identifying marks as is their dark chocolate pattern. They get their name because the inside of their mouth looks like white, sticky cotton.

Cottonmouth water moccasins like to live in brush piles near secluded areas of lakes and rivers. They like it back off in the loneliest of coves.

That was on Table Rock Lake.

You could take the light and shine it and see little red eyes all around. Her babies were coming too. It was creepy. I don’t go up in the little coves anymore.

They are the most aggressive, venomous snake that we have in the Ozarks.

A copperhead will try to sneak up and bite you during the right time of year but for the most part, they will flee. But a mama water moccasin will hunt you down.

Poisonous snakes, when in the water, are said to lie on the surface with the entire body afloat, while nonpoisonous serpents swim with only the head exposed; many hillmen really believe that this is a reliable way to distinguish between the venomous cottonmouth moccasin and several species of harmless water snakes. Some noodlers or rock fishermen, accustomed to catch a big fish with their bare hands, say that moccasins never bite a man under water. Others believe that the snakes may bite, but are unable to inject poison into the wound while their heads are submerged.

Many persons believe that female snakes, particularly water moccasins, swallow their young at the approach of danger. One of my neighbors says that he suddenly came upon a large “bitch cottonmouth” with a number of young snakes playing about her; the moment the old moccasin saw him she opened her mouth wide, and the little ones instantly ran down her throat. A few moments later he killed the big snake, cut her open, and found fourteen little moccasins inside.

Mysteries at the Board Camp Crystal Mine by Margie Kay
August 13, 2019