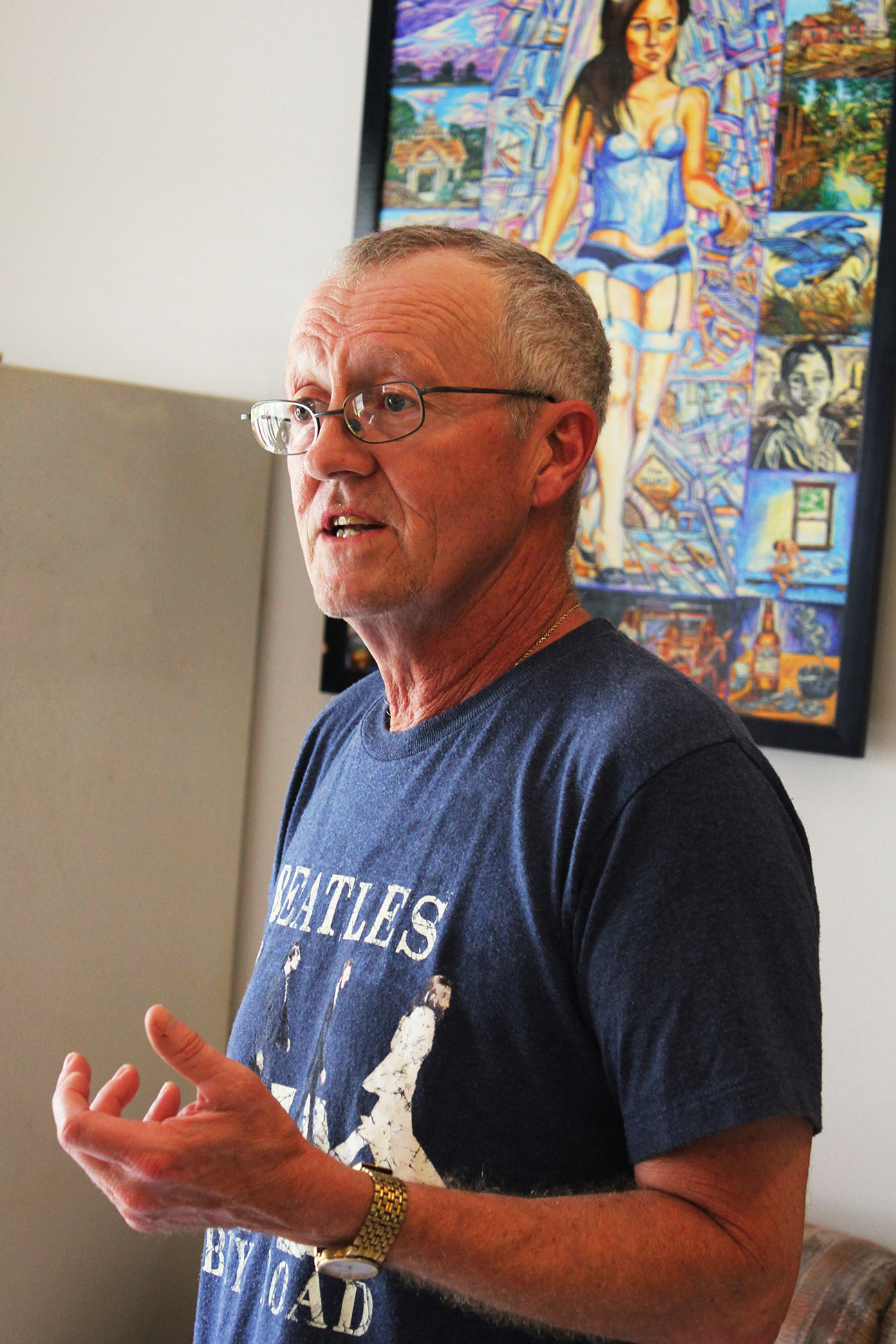 A Journey of Freedom: The Art of Harlan Bonar

The rolling, grass-covered hills west of Sedalia, Missouri, mark a transitional territory where the tall grass prairies converge with the northwestern Ozark Hills. The place is pastoral, but it is here — in an unassuming studio near the village of Knob Noster — visionary artist Harlan Bonar creates sprawling scenes of a far more extraordinary variety.

I visited with Bonar last August and, as a dry summer wind gusted through the studio, Bonar began detailing his journey — a journey that consistently results in a variety of dominant, visually arresting (at times provoking) images, all created with an eye toward history and a hand heavy in pure color oils applied thickly to often-massive canvases.

“I don’t even know if I have a style,” explains Bonar. “I do different things. I try to paint differently. I try to innovate, to fine-tune as I go. When I paint, I try to have an idea of what I want [the painting] to look like, but I’ve never had formal training. People want to call me an outsider.”

It’s not a inappropriate label, considering that much of Bonar’s artistic development has been a lonely journey, away from art institutions or the academics of the fine art world at large. However, if there is a signature style to this Missouri artist’s work, it is that Harlan Bonar’s style — while consistently recognizable — cannot be pigeonholed.

“I got my own ways of looking at stuff,” he notes quietly. ”As an artist you have to find your own individuality. I’ve been painting for 35 or 40 years. I try to be serious and meaningful. It’s not that I’m preaching to people but rather working to open them up to ideas.”

Bonar is just now being discovered by the greater art world of the Midwest. His Union Station in the Rain was included in the Top 50 juried choices of the 2011 Missouri State Fair Art Show in Sedalia. The Missouri Arts Council has selected the same piece for special mention in the coming year.

Despite the variety of work Bonar has produced, it is often his Civil War-themed pieces that garner the most attention. The thrust behind the paintings might surprise viewers believing the artist to be little more than a history buff or Civil War aficionado.

“[The era] was a significant period that defined what America really is. That conflict was about freedom. The South wanted to be free from the North. The North wanted to preserve a union of free men. The end result? Men freed from bondage.

“During the Revolutionary War we broke away so in essence it was a war about principles of individual freedom. Yet there was a people in slavery here, so it was hypocritical in a sense. The Civil War was a conflict that really shaped our country and made it into great country. We were the first country to establish a democracy with lasting power.

“America is unique in a sense that it has its own political and social basis. We were founded on the idea of freedom, of liberty. I think it is a significant subject.”

A consistency found throughout Bonar’s work is a duality of awareness, often a mixing of the sacred and profane, the militant with the peaceful. The Battle of Shiloh is an excellent example. “I wanted to have close combat shown and yet in the background is a very quiet, serene landscape. It’s the contrast between the landscape and the fighting that lends a certain broadening of the senses.

“The musketry was so advanced [by that era] you could kill a man at 500 yards so there were few instances that men were killed at close range. To paint that would be artistically difficult. But in the Battle of Shiloh, it was essentially two mobs of men killing each other. Most were untested in combat and it turned into a bloody two-day slug-fest.

“I was able to paint this horrific battle with a beautiful landscape. That’s why I love art. It is so liberating and it can do whatever you want it to do. You have such freedom and I want my art to be interesting to people.”

Bonar has — at times — encountered criticism for his direct portrayal of the human form. “I’m trying to be historically accurate, not profane,” he concludes. “But I like to have certain elements in my paintings that are different.

“I’ve always had a certain fascination with the human figure and it is one of the hardest things to paint. I’m not trying to create pornography but nudes have been in art forever. It is one of the challenges. Sometimes you are walking a pretty fine line but I think it is important to stretch boundaries.”

From voluptuous nudes to human slaughter to poignant moments of history and mythology, Harlan Bonar’s thick layers of vibrant oil tell a story. Few pieces, however, contain the vigor of his Bible-inspired pieces.

“I like doing religious paintings. I believe in God. He has a role in our lives. At the same time, how many times do we betray God?” asks Bonar, in reference to the Kiss of Judas. “How many times do we take on the role of Judas in our perception of God?

“Everybody does it to a certain extent in different things we do and the way we interact with people. I hope the painting brings an awareness of God, our relationship with God, and how we betray God.”

And when Bonar’s signature visionary realist style is limiting to a personal emotion? A transition to surrealism or expressionism is often the result.

“ I painted Old Man in the Mountain right after 9/11,” he explains. “The figure at the top with blood on his hands is Osama Bin Laden. All these other figures are symbolic and monstrous. He was a terrorist and had perverted religion for whatever reason. The Islamic religion is beautiful but certain elements lend itself toward horrendous acts. Violence begets violence and that is not exclusive to Islam. It’s not what God intends. He doesn’t want us to kill each other. That is the first of the Ten Commandments.

“I went to New York City for the first time just two weeks before September 11, 2011. It was an amazing place. And then to see all these horrible things just a short time later? This piece is more or less a reaction to all that. It was my own way of interpretation. You have a hell of a lot of freedom as an artist and I like that freedom.”