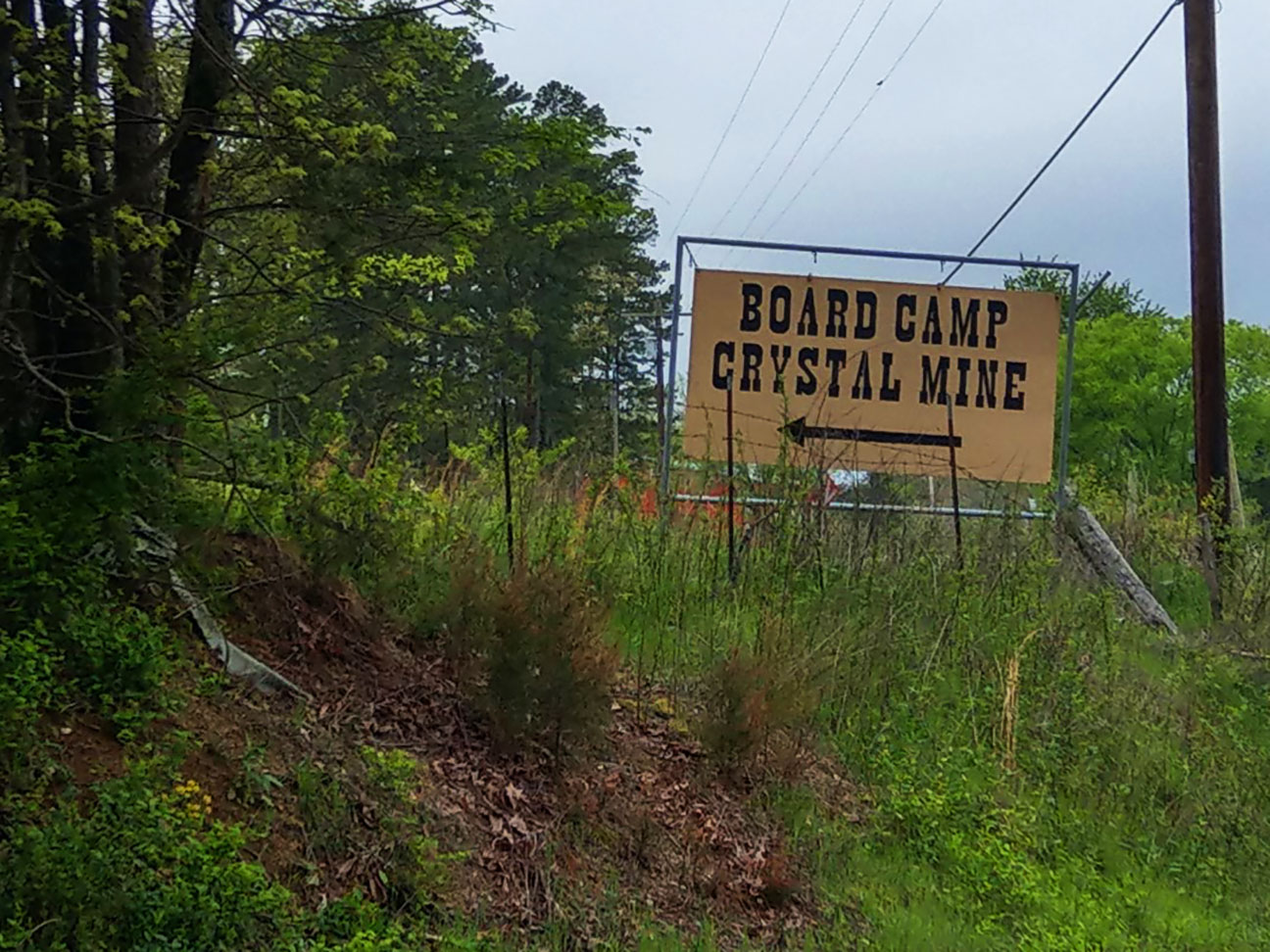 Entrance sign to Board Camp Crystal Mine near Mena, Arkansas.

Mysteries at the Board Camp Crystal Mine

My experience at the Board Camp Crystal Mine in Board Camp, Arkansas, began long before I set foot on the property. I’d heard about this mysterious place where people said they’ve seen not only Unidentified Flying Objects, but Sasquatch, mysterious lights, and even floating rocks. As a paranormal investigator, the thought of seeing all of these things in one place was extremely intriguing.

The mine is located near Mena, Arkansas in the majestic Ouachita mountains. Arkansas crystals are known for their quality, clarity, hardness, and unique electrical properties. They are used for commercial purposes in watches, cell phones and computers and are also prized by many for their healing properties. Some Native Americans believe the crystals from this region have sacred and spiritual meaning and that Board Camp Crystal Mine in particular is of great significance.

Orville and Cheryl Murphy, the mine owners, told me that representatives from multiple tribes have visited the site unannounced and independently on different dates after their shamans had received a message to do so. After blessing the site, the tribal representatives left. These sacred sites have been marked.

Orville and Cheryl planned to open this 50-acre site in 2012 as a campground but, when crystals were found, they decided to turn it into a crystal mine instead. They use hand digging methods only. No blasting or heavy equipment are used in order to “keep the integrity of the crystals in intact.” Orville feels that blasting would shock the crystals and change their energy.

In early 2017, the Murphys began noticing unusual events on their property. They witnessed strange orbs and lights and attempted to document some of these with the use of a night-vision game camera. The camera caught more than they bargained for, however, leaving them with more questions than answers. The first thing they noticed were unexplained lights. Even more astonishing was the apparent movement and levitation of rocks which were caught in stills and video. A hoax has been ruled out by the several investigators.

Two trees intertwined. The ball in the center is sometimes found elsewhere on the property.

I had heard about the crystal mine from other investigators who had been researching the site for the past two years. Gary Hart is a long-time friend and fellow paranormal investigator. He told me he had been to the mine several times and had equipment set up in order to detect any anomalous activity. Gary had experienced many unexplained events each time he visited, he said. Even Josh Gates from the show Expedition Unknown had visited the site!
Two weeks later, I arrived at the Board Camp Crystal Mine. Orville took me on a tour of the site. I was astonished to see the unique structures that had been found as the structures’ configurations matched what professional researchers have identified as signs created by Sasquatch.

Many of the structures made with trees are obviously not natural growth patterns: the trees have been manipulated to create different shapes. In some cases, two trees have been purposefully bent toward one another and twisted together. Several large trees have unnatural twists. One tree was bent over at a sharp angle, leaving three vertical limbs pointing straight up. Though manipulated, all trees are alive and thriving. Some Sasquatch researchers believe this tree-twisting is done as some sort of message to others of their own kind.

Not long before my visit, a stone arch had appeared overnight. Each rock had been chosen carefully in order to create an arch that formed a near-perfect half-circle. The rocks were laid without mortar and a single pointed rock was placed under the center of the arch. It was an obvious sign — but what did it mean? Perhaps it was a gift. I noticed when the sun was low, the shadow of the pointed rock became arrow-shaped.

Cheryl and Orville Murphy in front of their crystal shop.

As Orville drove me around the property I felt drawn to a small shack on a hill. Orville explained there have been sightings of Sasquatch around the shack, sharing there had been many Sasquatch sightings in the area, including one day-time sighting: “A nine-foot black-haired Sasquatch was crouched down but when spotted, rose up to his full height and stared at the truck. The creature was just yards away. He then turned and walked off into the woods.”

From the shack we went to the Murphys’ home and I spoke with Cheryl and her 102-year-old mother. Cheryl is very connected to the crystals on her property. I dowsed their home and found two intersecting ley lines in the center of their bedroom. Cheryl said she keeps most of her crystals in that room so we surmised the ley has been created by the group of crystals.

Gary Hart joined us at the observation deck that evening (the deck is actually a large stage Orville built for concerts). In the past, people have seen UFOs, beams of light and orbs and even had interaction with the Sasquatch. Some people have been gifted rocks by the Sasquatch, who are said to throw the rocks on stage when asked.

Orville put a glow stick inside of a half-deflated ball and placed the ball on a table in the field about 75 feet from the stage, bracing the ball with rocks. Night fell but with a nearly full moon and cloudless night, we had good visibility. It was then I noticed softly glowing bluish-white lights in the trees — and above the trees! These lights appeared and disappeared. Fireflies, by contrast, blink numerous times and have a yellow glow. At one point, my attention was drawn to the right where I saw movement in the trees. There was something tall and dark standing there, but I could not make out what it was. It must have moved away very quickly because I only saw it for a few seconds.

Stone arch that appeared overnight shortly before I visited the site.

After an hour, I asked Orville if I could put my REM Pod out on the table near the ball. A REM Pod is a piece of equipment used to detect static-electricity, magnetism, and electro-magnetic fields. It is very sensitive to changes in the area around it and this equipment has been quite useful in paranormal investigations. The REM Pod did nothing at first but after a few minutes it lit up, indicating that some type of presence was near the table.

I asked the question, “Are there any Sasquatch People here?”

The REM Pod went crazy with sounds and lights in answer to the question.

Orville then said “Go ahead and knock that ball off of the table.” He repeated the request several times. After about 15 minutes, we all heard a WHACK as something clearly smacked the ball and we saw the ball fly up into the air and down onto the ground.

I was in shock as there was no one near the table and we could clearly see all around the area. There was no person and no Sasquatch yet the ball was hit by something or someone!

Did this mean that what was out there had the ability to cloak itself? Many Sasquatch researchers believe these creatures are extremely intelligent and have the ability to move between dimensions.

At one point, Cheryl asked the Sasquatch to bring me a rock. With Orville, Gary, and Cheryl clearly in my sight in the front part of the stage we heard a noise behind us. We looked around — flashlights shining — and there on my backpack was a quartz rock. Cheryl said the rock had been gifted to me as the Sasquatch sometimes do.

Not long after, I asked another question: “Are there any extraterrestrials here with us?”

The REM Pod again went off with both lights and sound. We then heard a rock fall in the center of the stage behind us. It was a quartz rock, apparently shared in response to my question.

Table with rocks. The rocks are often moved around or replaced with different rocks.

The next night we were joined by several other people. Orville, Gary and a young boy went back and forth setting up the ball on the table and my good friend Judy White Wolf stayed with us on stage.

Judy is very spiritually aware and got the same impressions I did: this is a special place with high energy and many different types of beings want to experience it.

That evening, orbs of different colors and sizes appeared in the field and in the trees. The ball was once again smacked from the table several times. I then put the REM Pod in the center of the stage as I felt the presence of a large craft right above us. We put our chairs in a half-circle around the REM Pod responded to our questions. Possibly there were both Sasquatch and extraterrestrials visiting us per the answers we received.

Story and photos by Margie Kay.