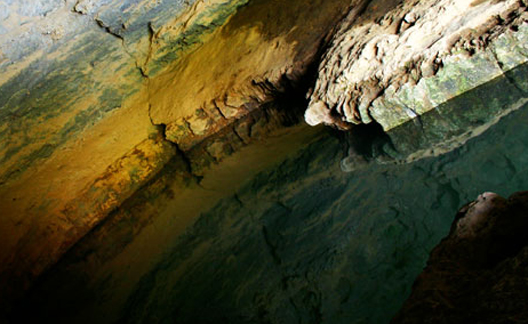 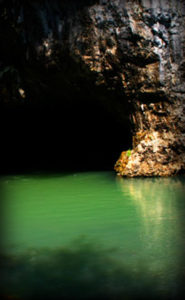 Cave Spring in Shannon County, Missouri, has seen its fair number of canoers (the Current River flows past the mouth of the spring) as well as hikers. I had the chance to visit in April, 2010, finding it to be one of the most exciting and mysterious places in the Ozarks. 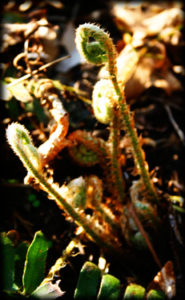 To understand Cave Spring in Shannon County, it doesn’t hurt to understand a little about Ozark geology.

First, imagine centuries of rain coming down on the Ozark highlands, raining down on beds of dolomite and sandstone.

Imagine thousand streams and creeks and rivers forming, coursing over, around, into — and through — the mountains. 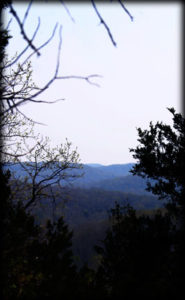 Geologists call it “Karst” topography, named for the Karst Plateau of Slovenia and northeast Italy.

A wild, beautiful and sometimes dangerous land — a rugged landscape.

It is a land of intricate cave systems tracing beneath high ridges of scrub oak and Indian paintbrush (PLATE 5).

You can stand atop those ridges and see forever — valley after valley, ridge after ridge of hazy, blue hills (PLATE 4). 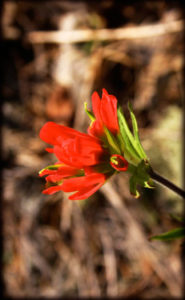 From the sunlit side of the Ozarks, they are all just holes in the ground.

If that hole in the ground is large enough to crawl into, it is a cave.

But if that cave has a river gushing out of it, the hole in the ground is a spring.

And down in Shannon County, downriver of Akers Ferry on the Current River, is the Ozark’s own Cave Spring.

From the Devil’s Well, it is a two-mile hike to the spring. 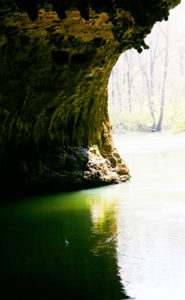 The trail follows the creek bed down toward the river before turning up Grassy Hollow — rife with fiddlehead fern (PLATE 3) and pawpaw — and then climbing high to a cedar ridge.

The trail then drops away to the Current River and the spring, but not before passing a stand of massive yellow pine.

Cave Spring is said to average a flow of 32 million gallons of water per day.

Much of the outflow is from an enormous lake beneath Devil’s Well, only two ridges to the east.

Large enough to canoe into, Cave Spring is a picturesque place.

It caught the eye of Thomas Hart Benton(who sketched and painted the cave in 1963) and is nearly impossible to miss by canoe or float tube on the river. 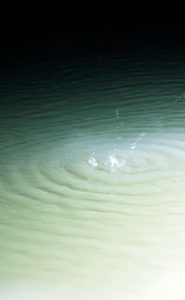 The entrance is preceded by enormous elms.

Cliff swallows nest in the dolomite bluff above the spring. A winding mud path extends into the cave (PLATE 6).

From within, cold spring water makes a dark river, reflecting the ceiling of the cave as a mirror (PLATE 1).

Swallows dart about silently — the only noise is that of water dripping.

Outside, a bright afternoon sun shines down, all but forgotten.