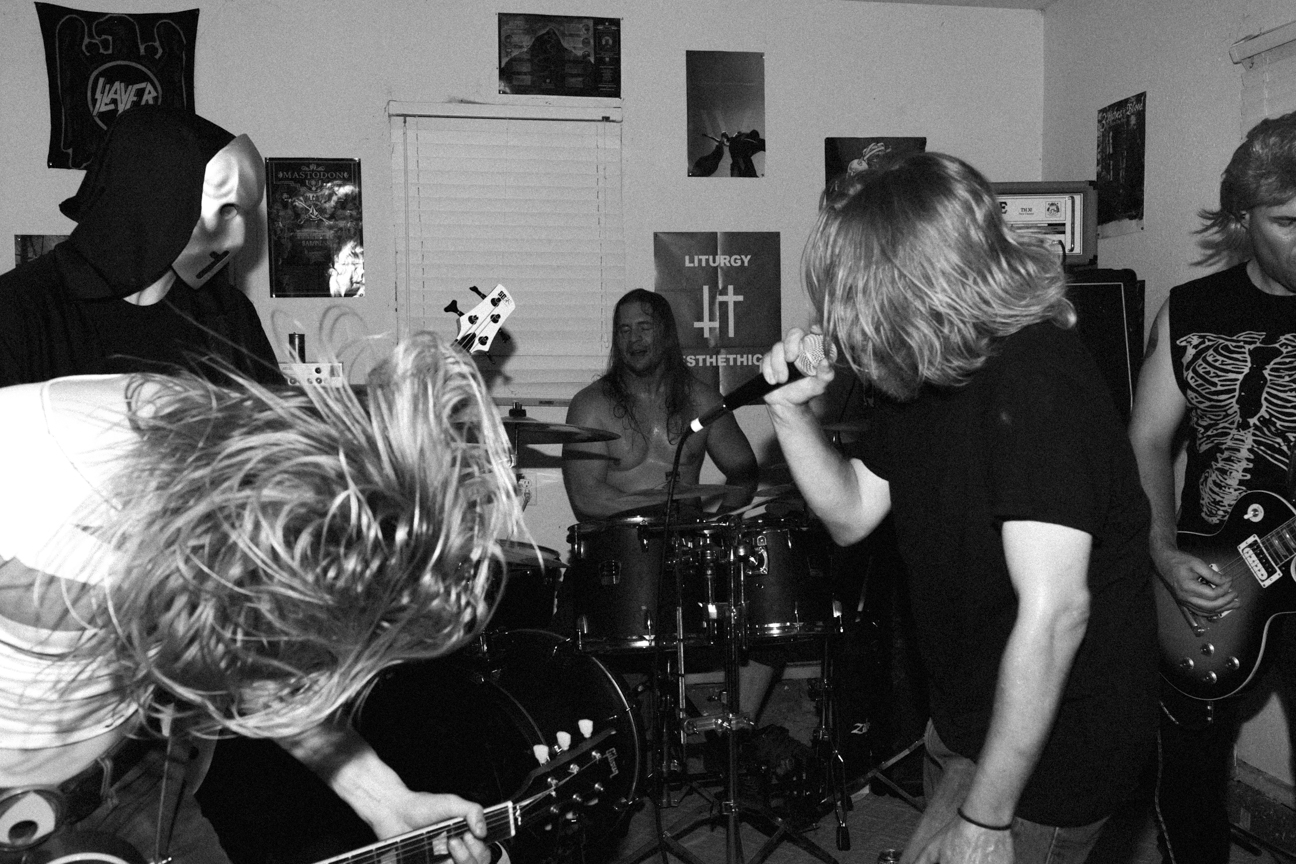 I could hear their screams from the road. Pulling up, a dim green light emitted from a farmhouse. It is here a group of metal enthusiasts came together to rage, just north of Branson, down a few back roads, in a place surrounded by cows.

The farm house was small. The room where the metal concert was held was even smaller. A single light fixture hung from the ceiling. The few bulbs produced an odd, green glow. The stage was a rug on the floor; the band eye-level with the audience, only a few feet away. The entrance was a side door in the back next to the kitchen. The kitchen floor was covered in different colored coolers, all filled with drinks.

As the night progressed, the crowd grew in size and became more and more wild.

People piled into the small room as Snake Fighter — headlining band and also the owner of the house — took the stage. In unison, we banged our heads up and down as Snake Fighter gave it their all. Spit flew from the band’s mouths as their hands moved like the wings of a bee across the guitar strings.

As the last song finished, we all clapped, hooted and hollered. Then, something unusual happened. Unlike large concerts, where bands may stalk off stage alien and separate from their audience, these musicians — who already shared the same plane — embraced the comradery and intimacy of the home environment. Audience and entertainer met in unison.

Half way through the concert, a friend familiar with the property took me to one of the cow pastures. Only moonlight lit our path over the hills. Large trees silhouetted the night sky. Turning back, we could see our friends in the small farm house and hear the concert raging on.

The last band to play (H.T.W.) dressed in steam punk attire, rocking out to Metallica covers and their own songs. The lead guitarist Kevin made eye contact with me. As if I were the microphone, he let out a loud cry. The lead singer moved her hands to the music, an orchestra conductor directing. When I went to snap a picture of her, she reached out, pretending to grab me.

After H.T.W. finished their set, many piled into the kitchen. Dressed like Cheech and Chong, Steam Punk, and KISS, the attendees began dancing to music from a small speaker. A man dressed like KISS reached over for a woman’s hand. Together they danced away wildly.

What happened that night was a rare culmination. Tired, sweaty, bruised people headed home for the night. Such intimate proximity to the intensity of metal music is a huge adrenalin rush— a rush contrasting powerfully with the beautiful quiet of the Ozark hills at night.