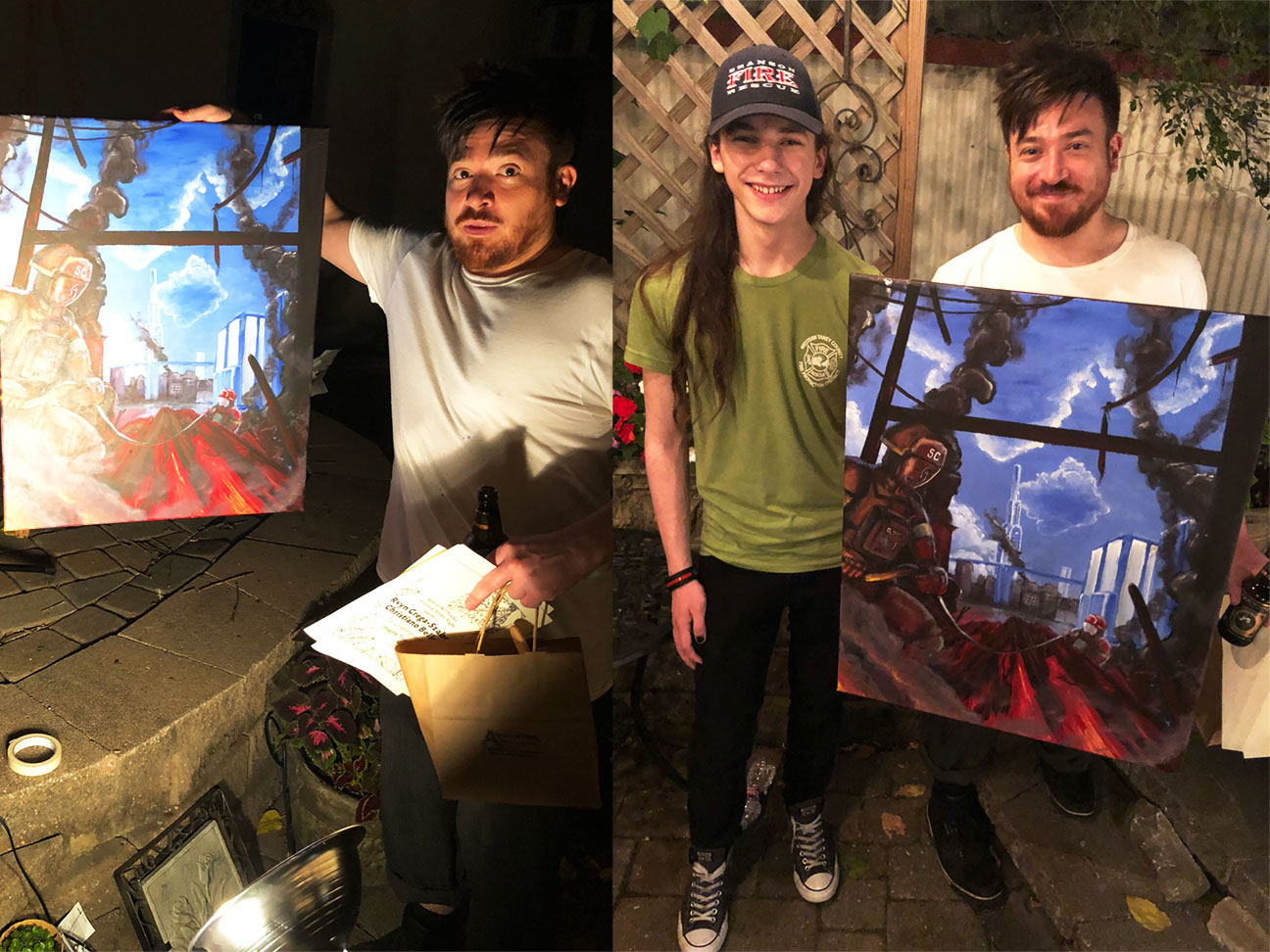 Here… before you say “I can do that,” try to imagine crawling inside of a cave, alone, in the dark and all that can guide you to the exit is a tube lying on a floor you can’t even see.

Try to imagine rushing through a void hearing the screams of victims you need to save before your luck runs dry… Like it has so many times before.

Imagine 1700-degree heat threatening you in these isolated halls, and the constant fear. The fear that the floor will give way to an endless pit. Or the fear that the ceiling will fall and you’ll be trapped under potentially thousands of pounds of rocks and wood, only to be left at the mercy of the helmet-melting-gear-torching heat that creeps inside these walls. Orr maybe you’re breathing so fast that 45 minutes worth of oxygen is only now worth 28.

My crew has been here before. In a city of over three million people protected by a little over 5,000 first responders, we are the thin red, blue, gold and white lines.

In a year, we have “5-5-5-5 first responder deceased” transmitted on a near-weekly basis, by suicide, gun violence, gang violence, terrorist actions. Or your carelessness from leaving the stove on before going to work. And we have to be the ones put our lives on the line.

As a squad company, we are assigned to everything we can be assigned too. Making us more prone to close calls.

We put water on fire when we can get to it before the shitty construction of these buildings shifts one last time, claiming the life of one of our own.

Or if you have been here long enough, you’ll have to live with the fact that 14 of your closest friends are inside those glossy wooden caskets because 16 brothers had to jump head first out the ninth-floor window of an illegally subdivided building that blocked fire escapes when our people needed it the most.

And all of our girls and guys have to live with the fact that they too could not move 11 million tons of rock in time when 23 more were trapped by a partial collapse of a 84-story commercial high rise.

We also on too many occasions have to rescue people or even our brothers and sisters from killing themselves by jumping off the 223rd floor of the biggest building in the county. I have pulled bodies of both civilians I have never met and firefighters I have known for years.

Since graduating the academy eight years ago, I have had to witness two of my crew members die — only two weeks apart. One because of the other.

This job comes with everything you’ll hope to never see or lose in a lifetime.

But we see it or lose it almost everyday. It gets to you.

I bet you have never walked into work and seen the excited smiling face of your newest probationary firefighter, only five hours later to see her dragged out of a building, gear torn, skin cut and blood filling a helmet to the point where your own crew doesn’t even start CPR because they know nothing can be done. And they don’t want to have to deal with the PTSD of seeing, close-up, this mangled 18-year old girl who never got the chance to graduate collage.

And we were responsible.

After dozens of hours of arguments with loved ones, or screaming, crying and spilling our souls out where all our brothers and sisters can see, we still only have dealt with a quarter of our journey to recovery. Imagine taking a pill that was not prescribed by your doctor just to escape a world you wish to never see again. Imagine cutting your wrists to escape the mental pain you have to live with, followed by thoughts of suicide or actions arising from the disturbing images we see.

And if you are still keen on saying “I can still do this,” imagine felling enraged for no reason towards yourself and others. Imagine depression and the feelings of loneliness and desensitization to the world around you, and last but not least, PTSD. This… this is the one that causes you too dream or hallucinate your most horrific memories over and over again.

The only thing you and I can do is try to talk about, and live with, the horrors you wish you could forget. Talking is talking and IT IS the only way of coping that is not temporary or destructive.

Don’t try anything more physical. I swear, it may seem worth it… But trust me, it is not.

Firefighter Dave Parnell once said, “I wish my head could forget the things my eyes have seen.” That quote sums up what you have signed up for when you finish the academy and take the oath to serve your community.

I wish I could say it was like the good old days when you fought fire and went home, and in most cases laughed about it.

But now, with all I have said, I would like you too to try to say “I can do that…”