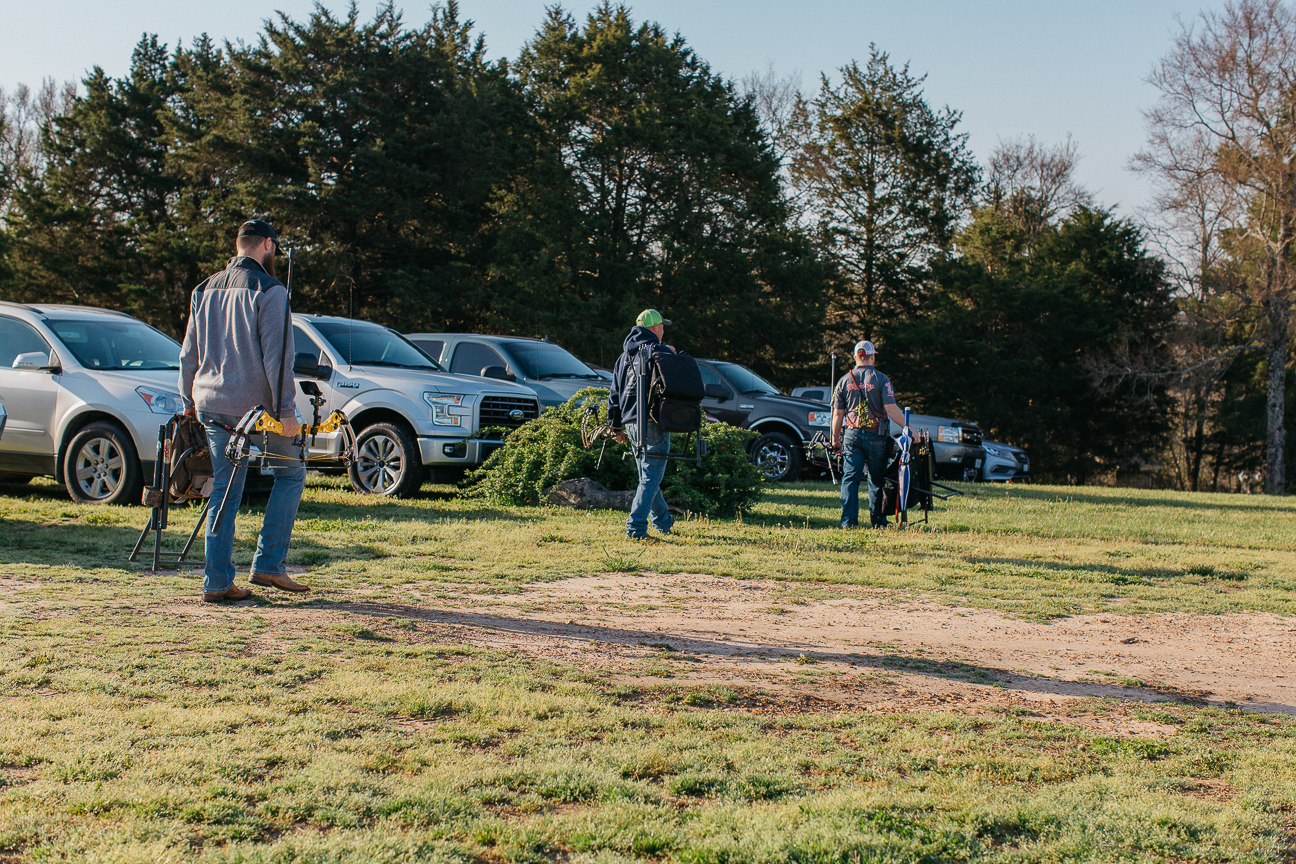 The sun had made its way up and was casting an orange hue over what would soon become a competition zone.

Here, in only a handful of moments, arrows will fly toward all kinds of “animals.” This is an Archery Shooters Association (ASA) Tri-State Qualifier hosted by the White River Bowmen and this bow shoot is a qualifying shoot (meaning that any competitor can go on to compete in Missouri, Arkansas and Oklahoma competitions). Archers began preparations as soon as their boots touched the close-cropped grass of the parking lot and adjoining practice range.

Six targets downrange. Archers warm up, fine-tuning their sights. As the range fills with competitors, you can hear the taut thud-thud-thud of strings snapping straight.

The first target is short, sticking up maybe eight inches above the ground. It’s a crocodile! Aim too high and the arrow goes over. Too low and your arrow hits the ground. In all, there are 30 targets, each a different animal. Every target has the same bullseye shape which allows the same point system to be used throughout the range. The course itself flows as a meandering, hillside horseshoe.

Breathe, focus, release. This is the rhythmic flow of the archers. Every target has its own set of difficulties: if the target is uphill or downhill; how fast the wind is moving; or how far the target is.

There are several different categories to compete in: known (you use a range finder to configure the range of the target), and unknown (you have to guess the range of the target). There are two classifications of bows: the recurve provides a sense elegance in shooting and has a more traditional approach. The compound is an instrument of precision. When pulled back, the bow allows the archer a moment of rest to help their aim.

It took each group of archers a few hours to work their way through the course. Towards the end of the course, the smell of hamburgers filled the cedar glades, an added treat to finishing the shoot.

A number of weeks ago, before the Taney County zoning board, a neighbor stood, shaking a handful of arrows. “I found these in the front yard,” the man said. The front yard in question is a property south of the competition area and was not the man’s property.

The land use is under review for a permit to allow the club to continue hosting archery shoots in this rural Taney County neighborhood.

When the zoning board convened for a vote, many neighbors showed up in opposition, making accusations that the shoots made them feel “unsafe.” In response, Davy Wilson explained the ASA deems their animal target’s thick foam cores as safe. At the county meeting, the neighborhood opposition continued to express discomfort with the shoots taking place.

The ASA has an insurance policy of three million dollars, “covering the land and those on it.”

Were competitors shooting arrows off property?

Wilson responded, “This is impossible. We would have had to turn the opposite direction of the targets and shoot towards the yard, shoot thought am RV, a RV-storage building and a house for the arrows to end up there. Or we would have had to walked around and shot the arrows in her front yard.”

“The club was encouraging people to miss targets,” the opposing neighbors said.

“No,” says Wilson. “The targets have to be visible. The size of every target is identical. The point of the competition is to hit targets.”

The planning and zoning board moved to deny the permit to the archery club. The club later received a letter clarifying the board’s decision. In the letter, the denial of permit was decided for reasons of “safety” and that the land was “unfit for use,” meaning the land area was too small.

According to Wilson, the club will appeal, thus giving them a second chance to get the permit approved. Until then, the club is able to continue holding shoots. As a result, White River Bowmen hosted a benefit shoot on July 28 in which proceeds went to local policemen and firemen injured in the field. Depending on the county’s approval or denial of the appeal, this could be the last event White River Bowmen host in this location.