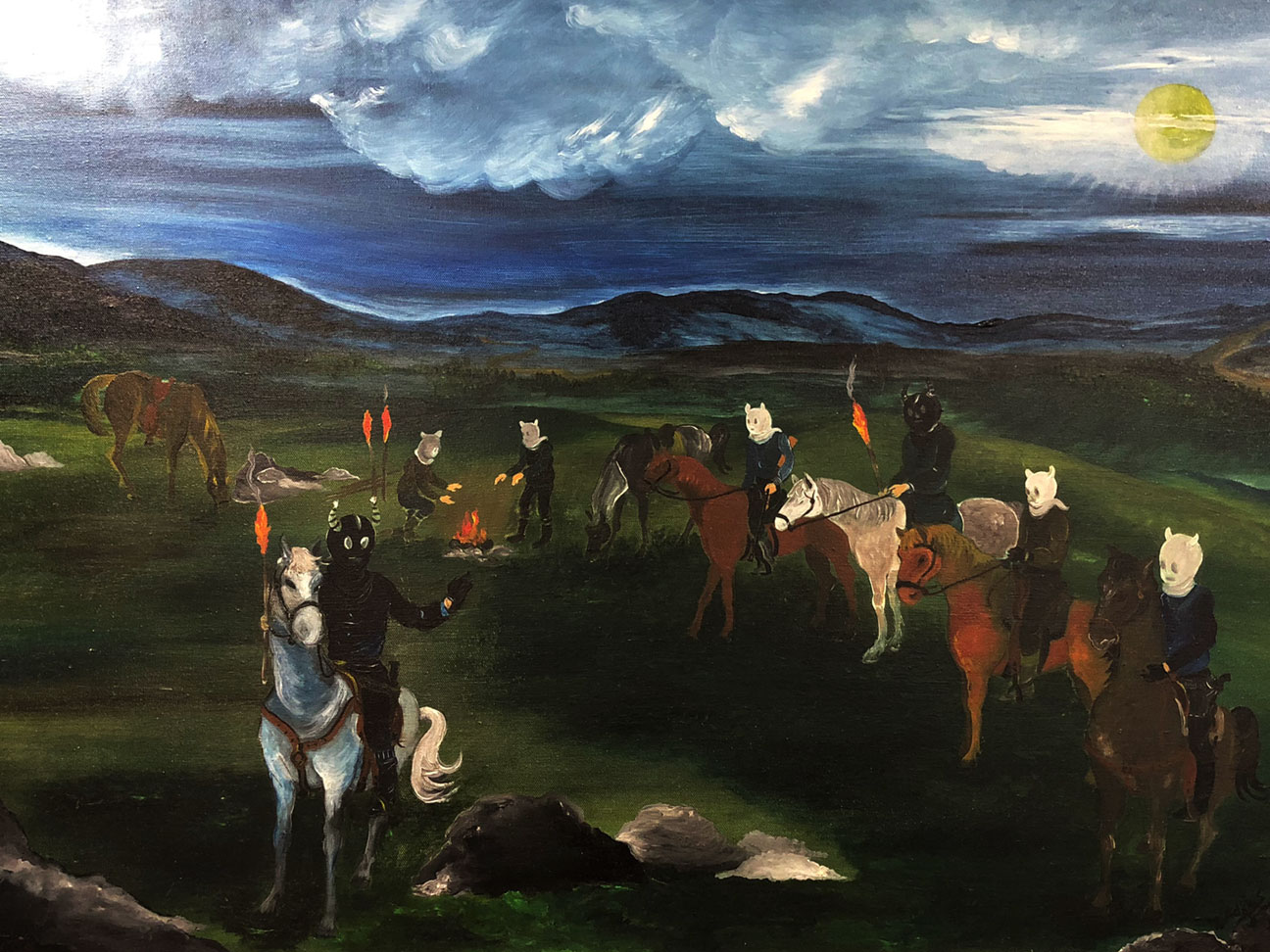 The Meeting by T. Adkins

Lawlessness prevailed after the Civil War with no legal protection for the settlers of the area. This need for law and order brought the citizens together to form a vigilante group to drive the criminal element from the area. This group of law-abiding men were determined to protect their homes and possessions and became known as the “Bald Knobbers.” The men would meet on tops of the bald mountains in the area. One of the best-known such meeting places was Snapp’s Bald.

Bonfires were built to alert the members of the group that a meeting was in progress and sentries were posted to insure that the privacy of the meeting would not be invaded.

With masks or pillowcases over their heads, and burning torches in hand, the Bald Knobbers rode through the night to punish or warn individuals of their wrongdoings and misdeeds.

While their intentions were good, the actions of the vigilantes could not be controlled and the true Bald Knobbers turned in their arms only to be followed by other night riders masquerading as the original band.

The main routes of commerce in the early 1800s were the river routes (as roads were nonexistent). The early river craft on the White River were dugouts, canoes, flatboats and keelboats, laden with cargo brought upstream by the river merchants to trade with the trappers and Indians. Common items for barter were flour and salt, coffee and whiskey, gunpowder, tools, pots and pans. They were traded for furs and pelts, bear bacon, buffalo beef, bee’s wax, and honey.

Before the advent of the steamboat, these journeys took many weeks and a tremendous effort. Prior to 1850, steamboats traveled up the White River to Elbo Shoals, just below the Missouri/Arkansas line. Unable to cross the shoals, they were forced to turn and go back down stream. In 1852, a new channel was cut through the shoals and the first steamboat completed the journey to the mouth of Swan Creek. This was a steamboat named the Yohogony in June 1852. The Thomas P. Ray made its way up the White, all the way to the mouth of James River, in May 1858.

The crewmen on these early river craft were very rugged individuals with fights and all sorts of boisterous behavior being a common occurrence at the landings up and down the river. In April, 1861, one such fight brought tragedy and death to Taney County. The first engineer of the Mary Patterson, Jim Massey, had an altercation with the sheriff of Taney County, Berry Ellison, and killed him in a brutal knife fight.

In 1808, the Osage Indian tribes ceded their Missouri / Arkansas lands to the US Government, which hastened the movement westward by the white man.

Turkey Creek Valley, A Village, A Town by T. Adkins

With the coming of the railroad, all sorts of people descended on the Turkey Creek Valley.

A wealthy group of businessmen from St. Louis build a hunting lodge just south of the valley, naming it the Maine Club. One of these men, George W. Perry, started a huge orchard, one of the many fine orchards and grape vineyards to dot the hillsides in later years.

Lead and zinc mines were opened and in full operation up the creek and the old swinging foot bridge crossing Turkey Creek would soon be replaced by the first iron bridge in Taney County.

Many tent camps sprang up along the creek bank. Railroad gangs, miners, and migrant workers of all kinds, even whole families, were camped out as housing was virtually nonexistent. The American House, with its few rooms, served hot meals, and the Log Cabin Hotel was built just above the site where the new depot would later be constructed.

The Turkey Creek Valley, once just a struggling homestead, was growing by leaps and bounds

In 1904, with the need for a post office, a man named Reuben Kirkham applied and received the commission. He suggested the name Hollister for the village, naming it after a town he had known in California.

The Missouri-Pacific Railroad was completed and the first train — the St. Louis, Iron Mountain & Southern — stopped at a boxcar depot on January 21, 1906.

W. H. Johnson, owner of the Johnson Timber & Realty Co., had a dream to build a town — a town that was to become one of the most unusual towns in the United States. With the help of J. W. Blankenship, Johnson platted a new town, an English village.

Hollister’s new depot was built according to the English style and completed on January 10, 1910. Soon after, new buildings on a new street were under construction and the Village of Hollister was incorporated on May 2, 1910, becoming the Town of Hollister.

The Fortner Homestead was destined to become the English Village in the Ozarks.

Cutting of the Ties by T. Adkins

In the late 1800s, a new era was beginning in the Turkey Creek Valley. Many pioneers had found the plentiful bounty along the White River inviting and began to settle the area. In order to sell their produce and stock, they needed a larger market.

Talk of a railroad to extend from Arkansas to Kansas City, Missouri, became more than just rumors. Operations for the Missouri / Pacific Railroad began in northern Arkansas and started the slow movement toward the Missouri border. The right-of-way was brought down the Turkey Creek Valley and straight through the old Fortner Homestead.

The needs of the railroad operation were many, but the first and foremost priority was hardwood logs to be shaped into ties.

For men who had never drawn a salary, the prospect of earning a daily wage was a dream come true. The cutting of the ties, dragging them to open areas where they could be hewn into proper proportions, and sending them on their way to the track-laying gangs, was a never-ending job.

With a good team, a sharp axe, and a strong back, a man and his family could have money in amounts never-before imagined in the hills.

Rising Waters at the Homestead by T. Adkins

The Homestead Act of 1862 brought many settlers to the Ozarks region. One of these brave homesteaders was a widow named Malinda Fortner. She discovered and claimed her land in the beautiful valley along Turkey Creek. She filed her claim for 120 acres in 1867, never suspecting that her choice of land in the Turkey Creek Valley would someday become an English village in the Ozarks.

The bottom lands along Turkey Creek were fertile and wild game was plentiful. The unknown hazards awaiting Malinda and her family were not visible to the naked eye, those hazards being the very thing of beauty that she had chosen for her own, to live by and cherish: the beautiful Turkey Creek.

When the rains came, day after day and even week after week, the normally calm waters of the creek would rise, overflowing the banks, moving closer and closer to the cabin. The rising waters would flood the crops and farm buildings, washing away months of hard work and toil.

Even poultry and livestock were washed downstream in the swirling waters of Turkey Creek, lost forever to the raging White River.

With the establishment of the U.S. post office in Springfield in 1839, the first north/south overland trail was routed from Springfield to North Arkansas. The rugged route was only a post road, but later became a stage route.

This route traveled the Turkey Creek Valley, wound over the mountains, and through the Piney Woods to Arkansas.

On the route between the settlements of Gobbler’s Knob and Pine Top, the road passed a section of very rugged terrain with huge boulders. The massive stones stood several feet above the trail at the point where it leveled out on a sharp curve between two steep grades.

This section of the trail became known and feared by the earliest travelers, as it was used by bushwhackers to conceal themselves and wait as vultures for their unsuspecting prey.

The innocent travelers would be within a day’s ride of their destination, only to be waylaid and robbed or even murdered. The massive stones came to be known as Murder Rocks.