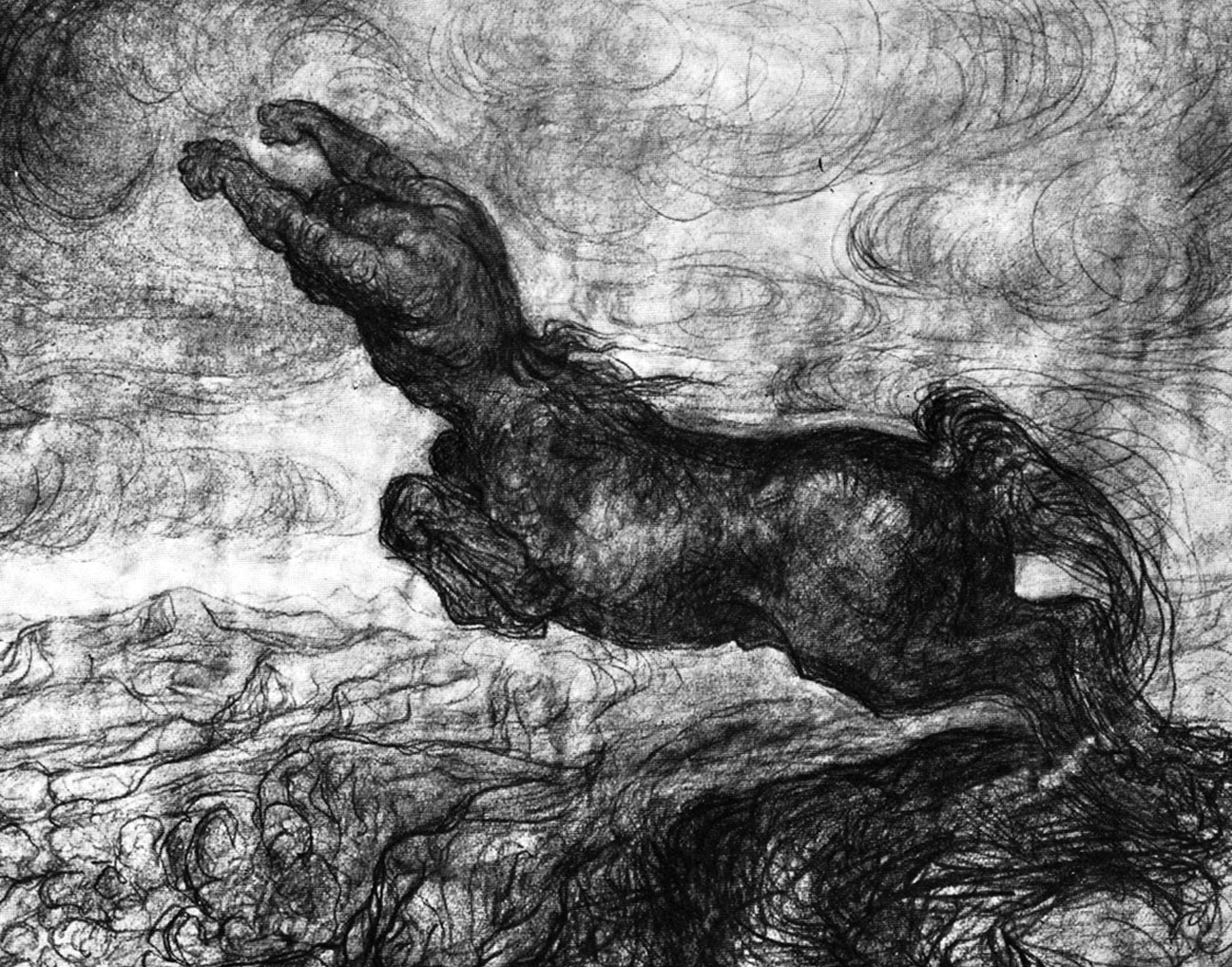 The Centaur Escapes displays an enraged centaur, half-man and half-horse — muscular back arched, fists clenched — against a troubled sky. From whom is he escaping? What cause is there of this angst? O’Neill, wisely, leaves that answer to the viewer — or, perhaps more personally, simply kept the answer to herself.

The Sweetest of Monsters

O’Neill was a gifted illustrator before she developed a now-nearly forgotten doll (the Kewpie) which, in terms of merchandising, was eclipsed only by the work of another Missouri artist (Walt Disney).

After a visit with aging French sculptor Auguste Rodîn, O’Neill was encouraged — perhaps demanded — to bring her private works to light. The Sweet Monster collection was never meant to be seen. “From a long practice of hiding what I was most loving to make, I had grown extremely shy. And I must confess I dreaded exposure,’” she wrote. The collection series met great success in a 1921 Paris gallery exhibition.

“In viewing the powerful drawings of Madame Rose O’Neill one would hardly be surprised to learn that this strange and profound artiste is also a great poet. Her melodious and nostalgic verses are at the same time an emanation of, and a stimulant to, her plastic feeling,” wrote Monsieur Arène Alexandre.

New York art-goers were not so kind the next year. American audiences were unprepared for the “Mother of the Kewpie” to be so liberated or so capable of drawing sensuous, enigmatic figures. In time, the artwork languished, largely forgotten.

It has been nearly a century since the serious artwork of Rose O’Neill was placed before a larger audience for debate and appreciation.

“The world’s greatest illustrator,” said Thomas Hart Benton of O’Neill. It may well be true.

Here, the soul is massive, earth-like, yet rests thoughtfully on the clouds. Diminutive man, again naked, sleeps at his soul’s feet. One of the more prominent works of the Paris exhibit, the image is considered a masterpiece of form. “The soul is still a rude achievement of the earth, uncouth, but a giant,’ explained O’Neill, “[L]ike some poor Titan leaning on the sky.”

In the development of a tender, sensuous relationship, earth consoles man in strong, loving embrace. The eyes are again closed. Note the similarities of form between earth and nature although earth is masculine (often rising from stone) while nature is feminine, with animal-like attributes (hooves and sometimes horns).

Earth, a great man-like figure appearing as of stone, nuzzles mankind. It is a common theme for O’Neill (the interaction of man and nature) and she pulls great pathos and compassion from simple lines and curves. Look closely at the figures. Man, who is tenderly leaning upward, mouth open, anticipates a kiss.

Although the Sweet Monster Collection — which may be viewed in great detail at the Bonniebrook Historical Society and Museum on the grounds of Rose O’Neill’s beloved Ozark mansion just north of present-day Branson — leaves us with many questions, the collection also gives some important answers.

Rose O’Neill was a beautiful, if melancholy, soul. Enormously talented, she was, for a time, one of the richest women in the world. But riches could not insulate her from great loss. She would twice marry and twice divorce. There is remarkable sensuality to her work, proving her understanding — and deep appreciation, perhaps longing — of the human form, both male and female. There is loneliness, tempered with contemplation.

Rose’s young brother, Jamie, died, quickly and unexpectedly, after helping an ill — and contagious — woman on the train between St. Louis and Springfield, Missouri. His death nearly broke her heart. In her art and poetry, there are corresponding periods of deep sadness. The native Ozark mountains are evoked in her art. Look closely and you can see shadows of great limestone and dolomite bluffs — old glades dark with cedar and forbidding. Lines flow across O’Neill’s paper like old Bear Creek flows across the stone at the foot of Bonniebrook.

Rose O’Neill grew up immersed in the Greek mythology of a classic, late-19th-century education and the Celtic legends from her first-generation Irish father.

Both would find form in her art. Both would give art critics a reason to cry Paganism! regarding her illustrations. But that imprecation was often used lovingly, even at the turn of the 20th century, regarding O’Neill’s Sweet Monsters. Still, it is striking how modern the illustrations are — how full of emotion yet devoid of sentimentality.

“The buffoonery of the Kewpies and the passion of my serious drawings playing side by side is unusual,” wrote O’Neill, “But not too unusual. In this droll existence, the Hamlet and Lear have always consorted with the clown.”

Below, perhaps O’Neill’s most violent work,The First Love Death shocks the viewer with deep, archetypal visions. The sloping, animalistic foreheads are again notable, as is a nod to Greek tragedy, particularly Ovid’s Metamorphoses. Was this a study of O’Neill’s sculpture Embrace of the Tree, a retelling of Apollo and Daphne?

ALL ARTWORK IS COURTESY OF THE BONNIEBROOK HISTORICAL SOCIETY AND MUSEUM. STATEOFTHEOZARKS GRATEFULLY NOTES THE ALLOWANCE — FOR THE FIRST TIME — OF EXTENSIVE DIGITAL PRINTS TO BE MADE OF THE O’NEILL SWEET MONSTER COLLECTION FOR AN INDEPENDENT ONLINE GALLERY VIEWING. PARTICULAR THANKS GO TO SUSAN SCOTT AND MARTHA MELTON FOR THEIR EXTENSIVE RESEARCH AND HARD WORK IN PRESERVING ROSE O’NEILL ARTWORK. DIGITAL PRINT MANAGEMENT FOR STATEOFTHEOZARKS: J. HESTON.