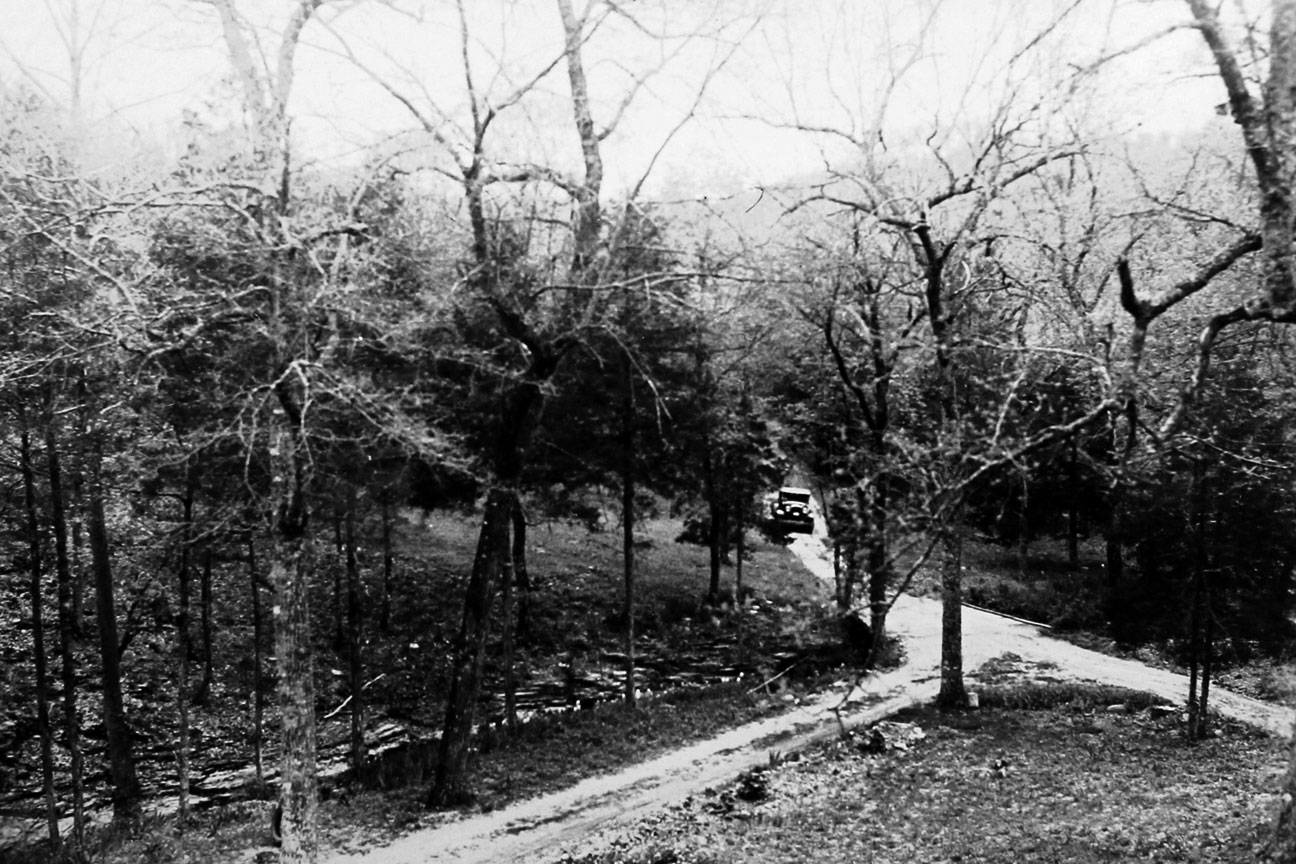 PLATE 1. Winding roads among the rocks and cedars lead to the Bonniebrook Estate five miles north of present-day Branson, Missouri.

On an early morning in January, 1947, the little Ozark cove and cedar break with a tiny stream leading down to Bear Creek was bleak and barren. Smoke rose from the ashes of a space surprisingly small for all the life and love, heartbreak and art that had been contained within. A mysterious place too, a small family cemetery lay nearby, holding the bones of an Irish immigrant family made good in the New World. And the house — mansion really, first in the Land of Taney to have three stories, 14 rooms and its own staff — was lost forever. Odds and ends, kitchen utensils, porcelain dolls all lay in the ash, most twisted beyond recognition.

The dream of Rose O’Neill was gone.

O’Neill would arrive in this Ozark holler in the spring of 1894. Earlier, her family — father William Patrick O’Neill, mother Meemie, siblings John Hugh, Jamie, Lee and Clink — had traveled by wagon from Omaha. William Patrick O’Neill had taken advantage of the Homestead Act and was yet another outsider moving into sparsely populated Taney County because of cheap land. Rose, burgeoning artist and illustrator, had been sent to New York City to study art. And so, fresh from New York, 19-year old Rose first made her way to the Ozarks.

She found a dilapidated homestead and a dog-trot cabin amid the bluffs and cedar — and she fell in love. The nearly impassable brush in the cove became the “Tangles” while the little spring branch became “Bonnie Brook,” so-named for the happy noises she heard it making. The place became a playground of imagination for this young girl who was rapidly becoming one of the highest paid illustrators — and celebrities — in New York. For you see, when Rose wasn’t playing in the creek or dreaming up fanciful stories of fauns and dryads, she was creating commercial artwork for the likes of Puck, Life, Harper’s Bazaar and Brooklyn Life.

Within four years, Rose’s income was so great she was sending money to her parents to build a replacement for the ramshackle dog-trot cabin. But this wasn’t any home. Built in stages, the Bonniebrook Mansion would become the grandest, perhaps most mysterious, certainly most eccentric, home in Taney County.

Raw materials came in the form of native oak lumber, milled by brother John Hugh. John had married local girl Lottie Mintz and teamed up with her father to begin a sawmill on the estate. Rose would decry the cutting of Bonniebrook’s trees, likely having made friends with many of them.

Exact construction dates are hard to nail down but as the money came in there were three construction phases. First, a living room, music room and library (with three bedrooms above) were built. John Hugh’s and Lottie’s son Paul would be born in the music room in 1900. Later a sprawling kitchen, dining room, laundry (and caretakers’ living quarters) were added. The place now had eight bedrooms and was the first home in Taney County with running water and indoor lavatories.

Lastly, a soaring third floor was added, creating Rose’s personal studio, complete with skylight, open balconies and a “Bird Café” from which the successful illustrator could embrace all the holler’s “rascally beauty,” as she called it. The natural world served as deep inspiration for Rose O’Neill but more than that, nature, so commonplace to others, was a fairy land of safety where, no matter the hurt of a world cruel, dark and frightening, there was always light and life and magic.

A common wood thrush (Hylocichla mustelina) became “the Flute-bird.” The yucca lilies, planted in profusion around the old place were — she would write in the spring of 1937 — “waiting for extreme white in summer and the white moth husbands when they let out the perfume at night. The night perfume of the yuccas is drunkening. Unlike the simple fragrances of honeysuckle, verbena, catalpa, it comes from some far other place [and] the shape of the massed candelabrum has been used in gold for monstrances in Italian churches — an elongated diamond. In the morning we have seen the snowy husbands tumbling out.”

Such was her balm and her shield, soothing and protecting this unique young woman from a harsh world outside. It was a world that would rob her younger brother Jamie of his life in 1905 (he is buried in a plot just down from the house). There were two marriages — and two divorces — as well as the shifting fortunes of the O’Neill’s artistic empire.

There were countless parties in this old mansion — parties filled to the brim with the glitterati of the era. There was poetry and song and literature, philosophy and love. There was also a lot of work as Rose teamed with her sister Callista to manage an at-the-time flourishing market for the Kewpie dolls. In 1909, Rose would later note, she had fallen asleep in her third-floor studio and dreamed of tiny, chubby, winged children — strangely reminiscent of her baby brother Jamie — dancing on the coverlet. She began to sketch them, sending drawings and a proposal to Ladies Home Journal. By December 1909, America was falling in love with the Kewpie.

In time, Rose would purchase a second estate, playfully named Carabas and located in Connecticut, as well as a villa on the Isle of Capri, just off the coast of Italy near Naples. However, Bonniebrook, with all its “rascally tangle,” remained ever close to the artist’s heart.

As the glittering fortunes of the 1920s gave way to the economic despair of the Great Depression, the O’Neill empire foundered. Rose lost control of her Italian villa. Travel was cut back dramatically. When debtors came calling, the lavish artwork and massive sculptures of Carabas were loaded up in the dark of night and packed off to Missouri.

“The Embrace of the Tree chained in the bottom of the truck with the Fauness must have heaved like a titan in the womb of his mother,” Rose wrote. “Ten feet of Indiana limestone weighing, I think the man said, as much as two tons. The statues now have their feet to the ground on the innocent lawn of Meemie who would have taken little pleasure in the brutes.”

Meemie had passed away in the spring of 1937 and her loss hit Rose, herself 62 years old, very hard. A personal journal notes the loss and the intimacy of daughter and mother and their shared affection of the natural world made magical by love and poetry.

“I sodded a naked path in Meemie’s sacred lawn and planted seed on others,” she wrote on April 30, 1937. “Meemie’s ‘red star’ is plentiful,” on May 5. And on May 30, “Honeysuckle in flood. Humming bird appeared yesterday. Meemie’s big rose in middle still going. Her wild verbenas still talking about her.”

And on July 6, 1937, “Hollyhocks giving up the ghost. Yuccas all gone. Day lilies done except for Meemie’s double ones. Portulacas flourishing but they go to sleep pretty early in the afternoon. Most of my infant phlox dying….”

In another nine years, Rose would be gone as well, the once majestic mansion a dilapidated ruin. Jamie, Meemie, Rose and Callista lay in the graveyard down the lawn overlooking the beloved “Bonnie Brook” — that same spring branch of which Rose had noted, on June 9, 1937, “the brook was wild and yellow as Tiber. By eight or nine it was clear but splendidly enraged. Clink put me into his rubber boots and I went down the valley to see Bear [Creek]. He is up to the banks to the knees of the trees, pressing powerfully, yellow and actually making a noise like the edge of the sea.”

And then it was January 1947. Brother Clink, a savant scarcely capable of caring for himself, was alone. It was a cold night and he had tucked a box of kittens near the stove, building up the fire to keep them warm, before heading over the hill to eat supper at a neighbor’s. By the time anyone saw the smoke, it was far too late. Forty-nine years of art and life and love was gone forever.

The land, dark and abandoned, lay bleakly until the 1980s when the Bonniebrook Historical Society — having been formed in 1975 — raised enough money to begin a reconstruction of the mansion. Bob Gibbons, the first Society president, worked hard to get Bonniebrook included on the National Register of Historic Places. Darwin Anderson, second president, focused on obtaining the massive Embrace of the Tree — which had to be again shipped, this time from Michigan. Fourth president Lois Holman worked to raise funds and fifth president Cliff Harralson oversaw the completion of the mansion in 1993, 100 years after the O’Neill family first drove a wagon into this old holler.

As close a reconstruction as possible, the mansion is open to tours, as is an adjacent art museum. And yet there are many details lost to history. Rose called the mansion her “Green House in the Woods,” which inspired the structure’s present-day paint job. But vintage photos suggest something different. Was the house painted green or was it green because of the masses of vines that slowly encapsulated the mansion over the years?

Early photos suggest unpainted, plain oak siding. Over the decades, the home itself may have become moss-covered — degrading to its structural integrity but likely appreciated by the eccentric and artistic O’Neills. A recently uncovered photo of the back of the home — the only photo known to exist — shows inconsistencies as well.

Regardless, the estate — mansion, creek, gardens and humble cemetery — is still a mysterious, enchanted place to those who embrace the mythical, the legendary and the strangely magical.

“Flute-bird singing,” Rose would write on July 14, 1937, “But less continuously. A long farewell — waving of hands, dreams when the day forgets. Epoch of gladiolus. There should be a sign, not a word, to express marvel.”

ALL PHOTOGRAPHY IS COURTESY OF THE BONNIEBROOK HISTORICAL SOCIETY AND MUSEUM. PARTICULAR THANKS GO TO SUSAN SCOTT AND MARTHA MELTON FOR THEIR EXTENSIVE RESEARCH AND HARD WORK IN PRESERVING ROSE O’NEILL ARTWORK. DIGITAL PRINT MANAGEMENT FOR STATEOFTHEOZARKS: J. HESTON.