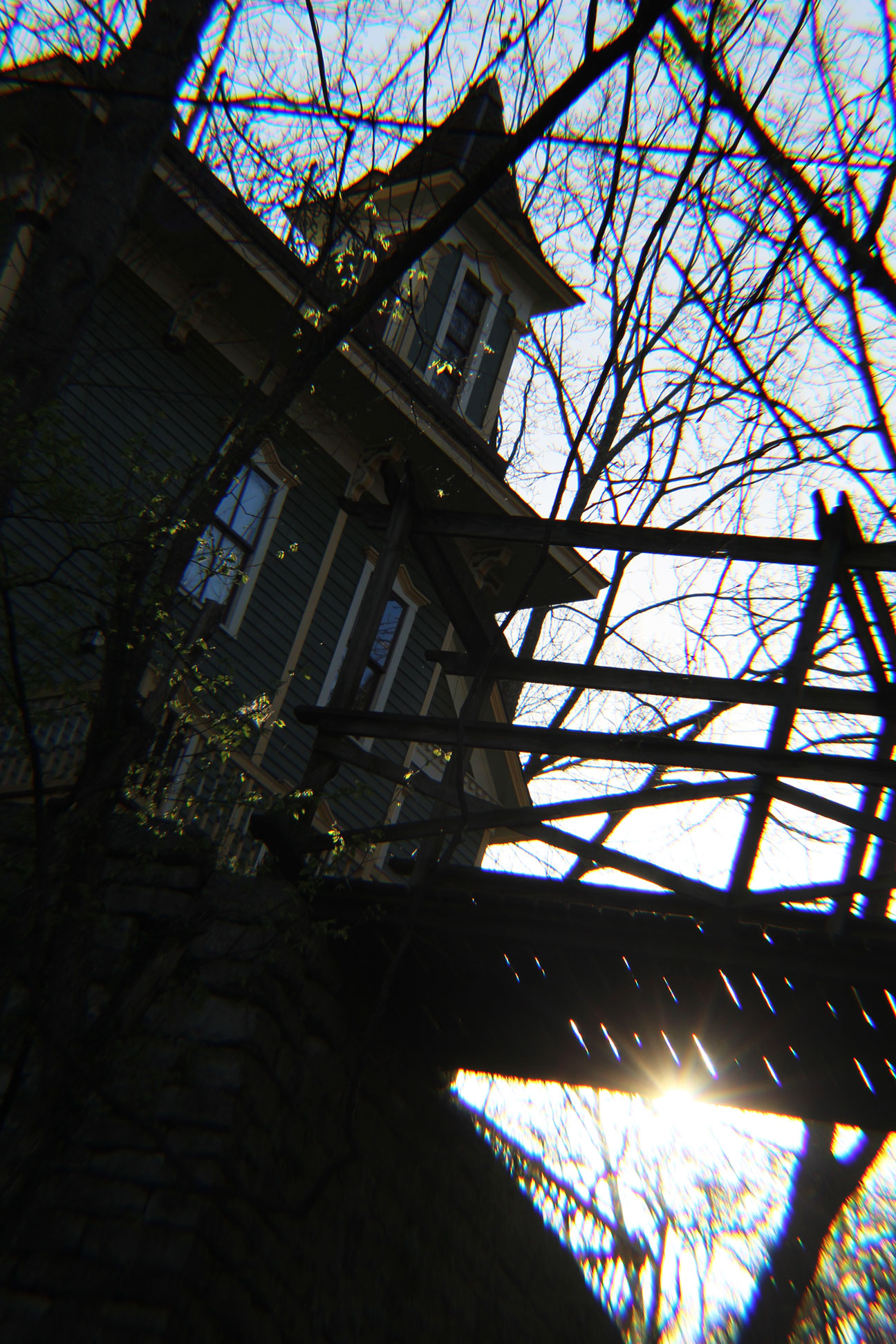 PLATE 1. A Victorian mansion with neighborly — albeit rickety — bridge as seen on Eureka Spring’s West Mountain, framed by the Ozarks’ setting sun.

It is Thursday and I am on story assignment — this time at the Ozark Mountain UFO Conference.

If there’s one thing I’ve learned over the years, however, it is this: No matter how fascinating a convention may be — and a UFO convention is fascinating! — always take time to scope out the town, whether that town be Louisville, Raleigh, or, in this case, Eureka Springs, Arkansas.

If you’ve not been here before, Eureka Springs is a tiny city in the Ozark Mountains of northwest Arkansas and here, in this steep, narrow valley, there are more stories to be told than even I can imagine.

What is this place about?

Downtown, I watch tourists flock from store to store, laughing, buying, holding hands. A young couple pushes their toddler in stroller up the steep, dusty sidewalk, beneath the limestone pillars of the Basin Park Hotel’s portico. A local teen in the park strums a guitar, singing, sitting next to a tree upon which paper wishes are tied to low-hanging branches.

But look deeply, beyond the bustle, beyond the superficial. Beyond the pat answers of postcard history and happy tourism.

There are stories here.

High up on West Mountain, the imposing limestone Crescent Hotel — built in 1886 — overlooks the town. This was home to the carriage-set, an all-American aristocracy, a self-contained and lavish turn-of-the-century universe vacationing within these rough-and-tumble hillbilly hills. Here the hired help were given their own tower of rooms — and African-Americans domestics relegated to the hotel down the hill, across from the library.

Later, the Crescent Hotel would be haunted by the memories of the dying. Turned into a hospital by a deranged man claiming lavish cures, the desperate traveled to this mountain from far and wide, often only to die terrible deaths. The autopsy table — complete with gutter-like drain — is still in the basement.

This makeshift morgue is beneath the servant quarters and next to what was once the hotel’s meat cooler.

Just down the hill, the bells of the Italianate-style St. Elizabeth of Hungary Church still toll on the hour. Passerby toss pennies onto the parsonage roof — the church entrance is through the bell tower — for good luck.

Richard Kerens, the chapel’s 1909 builder, dedicated the place to his mother. “He left for Europe and the last time he saw his mother, she was standing where the bell tower is now,” shares Keith Scales of the Crescent and Basin Park hotels.

As the sun begins to set — and with ice cream cone in hand — I wander past the church and down Crescent Drive. This was once the grand avenue entrance of the Crescent Hotel. The way is framed by towering yellow pines. Below, the historic mansion roofs of Eureka Springs’ wealthy are seen through the trees.

In the 1880s, West Mountain was the mountain to live on.

There are strange energies coursing here. Beneath the thin soil and within the heavy limestone is an intricate lattice of waterways. Springs — a total of 63 in all — stream from the rocks of these two facing mountains. The Osage said the spring waters were healing and Alvah Jackson, who founded the town, built the community’s popularity on the possibility that drinking this water might — just might — heal whatever ailed you.

Thousands flocked to Eureka Springs in 1878 — in part an attempt to escape the yellow fever epidemic which had swept Tennessee, Louisiana and Arkansas. “Before the place was cleaned up with real infrastructure and sanitation, outhouses lined the streets between the springs” notes Scales, “This place had to be pretty ripe in the summer.”

With changing fortunes, Eureka Springs became a Victorian gingerbread fairyland. Gas lamps gave the nighttime streets a warm glow. The rich and powerful of America traveled to this hamlet by rail, vacationing for whole seasons, servants in tow.

Downtown, the Basin Spring Park Hotel was built in 1905 — replacing a wooden hotel lost to a fire. The Basin Spring Park Hotel is rumored to be haunted as well. “The Basin was much more the hotel of the people,” shares Scales. Here, the rooms were cheaper. And across the narrow valley you can still see the cottages of those who made the carriage set’s lifestyle possible.

Two distinct social strata existed here, each on their own mountain — the wealthy versus the working class.

As the 20th century marched on, the Basin would also become home to gambling and bootleg liquor. The Chicago mafia vacationed here after World War II.

As I wander down Spring Street — past the confetti clouds of dogwood and redbud hiding the ornate Victorian mansions — it becomes obvious:
Eureka Springs has always thrived on contradiction.

No one can prove the springs here ever had healing powers and today — with so many living on the hills above — the waters aren’t safe to drink. But stand before Harding Spring and watch as the water trickles from beneath the bluff into an impish garden filled with iris, tulips and columbine, and tell me there’s not magic yet.

Across the street, the ribald silhouette of the Palace Hotel & Bathhouse’s street sign still lights up as evening falls. Local lore says it was the first neon sign west of the Mississippi. W. C. Fields was a regular visitor to the Palace. Oh, and the place — just a block down from the local church — was once a brothel.

Up on Magnetic Mountain, the well-known Passion Play beautifully reenacts the last days of Christ. The Biblically themed amphitheater spreads out beneath the outstretched arms of the “Milk Carton” Jesus, a towering, minimalist sculpture devised by Gerald Smith.

Smith was a clergyman, Wisconsinite-by-way-of-Louisiana, and vehement anti-Semite. The 1966 statue, which stands over 65 feet tall, was the work of Emmet Sullivan. Sullivan is better known for creating a passel of life-size cement dinosaurs across South Dakota as well as in nearby Dinosaur World. He also worked on Mt. Rushmore.

This year, the Eastern Gate of the Passion Play is the location of an 84-hour Carroll County Bible-reading marathon coinciding with the National Day of Prayer. Also this month, the Goddess Gala, the 29th Annual Ozark Mountain UFO Conference (and adjoining 11th Annual Transformation Conference), and a springtime Diversity Weekend are welcomed.

Is this place for real?

I finish my walk downtown. Along the way, I pass a statue of Star Wars’ C3PO staring vacantly from a store window, the Christian T-shirt-and-book store, the kinky negligee shop, the Rowdy Beaver bar, and a junk-filled and unpainted pickup — quilted afghan on the seat, cross hanging from the rear view mirror, toy light saber rather than rifle in the back window.

Another local truck rumbles past, windows down, Confederate flags flapping. The south wind dies hard around here, even in a town hopped up on tolerance and transcendence. I suspect local mountain folk have always cast a strange eye on the newcomers of this topsy-turvy town.

The juxtaposition is, however, strangely gratifying. I’m giddy as I climb the narrow stairs of the Basin Park Hotel to sit on the balcony and order a hamburger and fries. Motorcycles thunder in the streets below. My meal comes quickly and it’s a good thing too. I still have a full-stomach sprint up the mountainside in a few minutes.

There’s a ghost tour at the Crescent Hotel at eight.