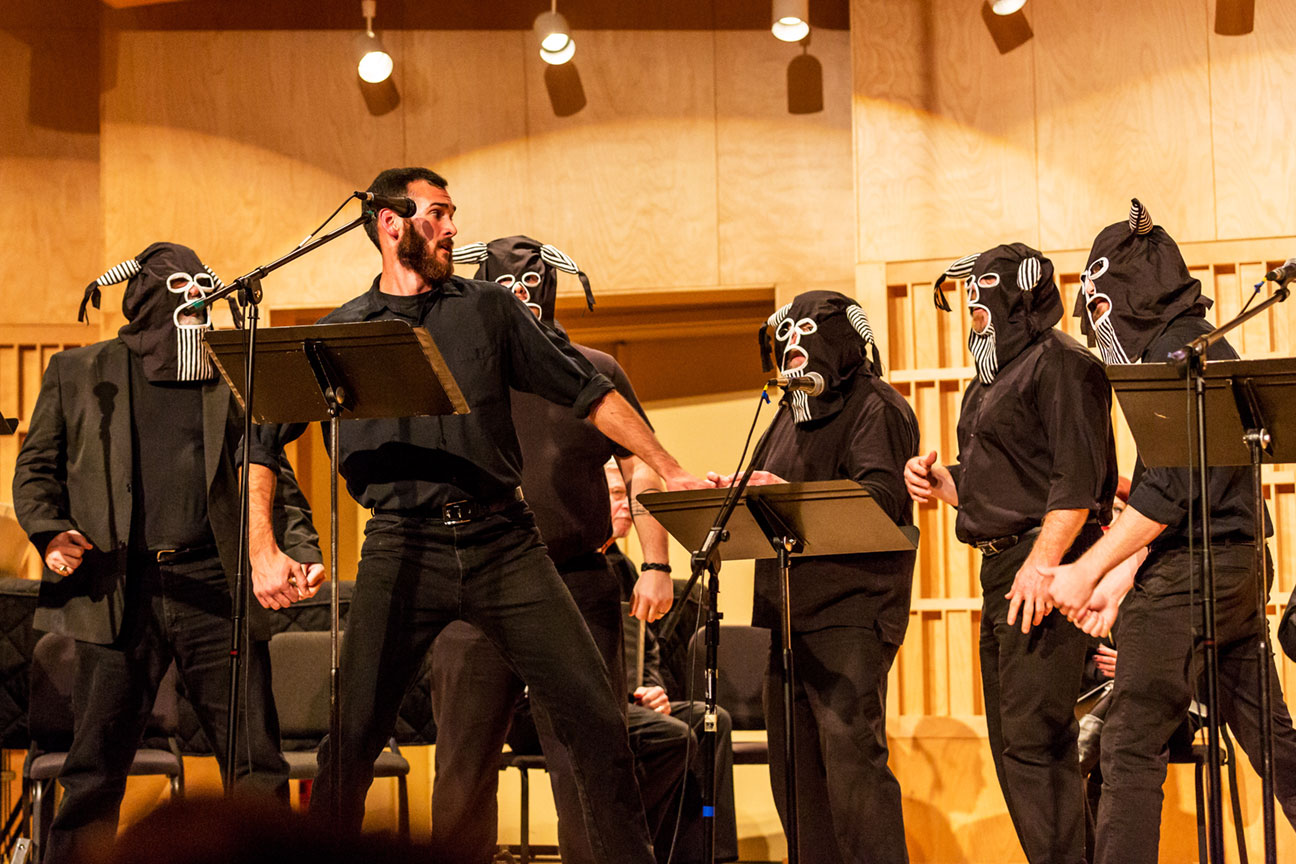 by Joshua Heston with Caleb Brubaker

“Do they think this is the end?” Dave Wallace wondered as he looked over an audience rising to their feet. The applause was long and lasting as the house and cast wiped away tears. Wallace was crying as well. Wallace, though only 35, had been given the role of the paternal “Shepherd” in a production created by composer Stan Beard and Dr. Hayden Head and based on Harold Bell Wright’s 1907 book The Shepherd of the Hills.

This night, the production (simply titled Shepherd the Musical) was getting a run-through of sorts — a concert reading in Gittinger Recital Hall on the campus of College of the Ozarks. The community had been invited in force.

Beard, whose work as musical director and composer includes the long-running Silver Dollar City productions A Dickens Christmas Carol, Headin’ West, and It’s A Wonderful Life, was at the piano, having written the score and led the premiere’s direction.

“Stan certainly qualifies as a genius in my mind,” shares Kevin Day, a Branson actor, musician and craftsman who performs as “Harry the Photographer” in Shepherd. “The music he writes is very melodic. It’s complex. As far as structure there’s a lot going on. I like the spontaneity of his music. It’s very intelligent and tasteful.”

When Beard was first contacted by Dr. Hayden Head, the composer was not familiar with Wright’s work. “When I finally read the book,” he notes, “I couldn’t believe when it was written!” The book was a best-seller when released early in the 20th century. Many, however, feel the novel resonates with timeless themes.

“I think back to the historical aspect of the town and the novel and I think that means a lot to us who are long-time Branson folks,” says Marty Schmitt, 22-year entertainment manager with Silver Dollar City. “We have to keep that legacy alive and not allow it to be buried in the glitz and glamour. We need to keep the integrity of Harold Bell Wright’s novel.”

It was Schmidt who introduced Shepherd’s writer — Hayden Head — to its composer — Stan Beard. “Stan was very gracious,” she remembers. “And Hayden is such a faithful and good man. I knew him because of his wife Sue. Hayden knew God was going to do something with this project. He waited years for the collaboration.”

Matters of patience, faith, humility and challenge resonate throughout the lives of those involved in the production as well as the novel itself. Further, Wright addressed difficult issues that speak to a modern audience — depression, broken relationships, teen pregnancy, illegitimate children, even mental health.

“Pete knows…” is an echo throughout the book and the phrase is part of the Branson lexicon, but dig deeper and you find a bastard child described by his own grandfather as “witless.” “We would have terms to describe Pete today,” notes Beard, “Words like “autistic’ or ‘asperger syndrome.’”

The role of “Pete” went to the sublimely gifted yet understated Captain Sibley of Springfield, also known for his role of “Tiny Tim” in A Dickens Christmas Carol. “He’s just an unbelievable young talent,” says Beard.

Wright understood humanity and incorporated powerful themes into his works. His literary wrestling with issues of integrity, morality and intellect remain timeless. The author also understood the Ozark Mountains to be a harsh place often producing harsh people — as exemplified by his character of Wash Gibbs, portrayed by robust Branson actor Robert Montgomery. “They told me, ‘Speak softly and carry a big stick,’” says the actor. “Bringing it down to almost a whisper as I’m making threats was a unique experience for me but ultimately a good one.”

Yet simultaneously Wright lyrically wrote of the Ozarks as a beautiful and serene place — a place of rest and spiritual healing. Both subjects are explored through the song, “These Hills Ain’t What You’re Lookin’ For.” The men of the cast sing of the hardships and trials while the women echo the beauty and peace.

The pain of an internal struggle or private trial is also heady subject matter in the hands of Wright — a theme furthered by Beard and Head’s empathy.

“Stan’s walk in the wilderness was with his wife Heidi,” explains Marty Schmidt. “Her illness was a three-year walk for both of them, completely walking by faith, desperately dependent on the Lord daily to get through.” When asked, Beard points to his co-collaborator as inspiration as well. “Hayden was involved on this project a long time before he even heard my name and he wrote Shepherdto soothe his own spirit.”

“A lot of this was precipitated by my father who passed away in 2008. He was just a kind and holy man, just a…,” Head paused for a moment, speaking from the heart, “…a beautiful person. And so, that was obviously hard. Working on the play kind of helped me. I guess you could almost say it was a sort of therapy.”

Head understood the pain of death and found a beautiful and passionate sorrow in the words “the taste of tears and the smell of rain,” words which worked their way into the song lyrics and the audience’s hearts.

This was the understanding that pushed Head forward; an understanding Beard drew upon. Day furthers, “It’s the passion in the music. Stan has walked through a lot of things in his life. I think that’s made him a deeper writer.”

Even so, the artistic creation of the music was not, initially, an easy one. “At one point,” confides Beard, “I told Hayden, ‘I don’t think I’m going to be able to continue this project. But when I sat down [at the piano] I said, ‘Okay, let’s see if I can write one line,’ and literally within a bit more than a day, I wrote the rest of the score.

“That was when I felt very clearly called to be a part of Shepherd.”

Beard’s calling culminated in a brilliant piece of work and the audience responded enthusiastically to the minimalist presentation of the concert reading. There were few props. The actors, dressed in black, faced the audience.

Extraordinary focus was placed on the humanity of the characters.

Following two sold-out shows, Head and Beard hope for more open doors — perhaps a touring company, perhaps a permanent home here in what is still known as “Shepherd of the Hills Country.”

“The questions is, as they say, ‘How does it play in Poughkeepsie?” Beard muses. “It was a phenomenal experience and I hope and pray it makes it to a larger venue and a full show here in Branson.”

“Hayden has done a very good job of capturing honest words and real emotion throughout the whole of the show,” continues Dave Wallace who, as “The Shepherd,” was called upon to carry the weight of the show’s emotions during the second half.

“The words Hayden wrote are so simple but the power is undeniable.” Wallace stands, facing the audience, tears streaming down his face as he discovers his son “Howard,” (Jonathan Beard) is dying.

In the audience, “I looked over at my sister and her little lip was doing this quiver thing,” recalls Schmidt. “We just sort of met eyes for a second and it was like, ‘Oh, my gosh! We’re watching history being made.’”

The audience rose to their feet, wiping tears. The applause broke the tension, surprising even the cast.

“It was really overwhelming,” says James. “We got the standing ovation and we didn’t expect that because it wasn’t the end of the show!”

Emotions were high and it was hard to imagine a dry eye in the house. “The Believe piece is really the emotional zenith of the show but it’s not the finale,” Beard insists warmly.

“Life is a collection of moments,” observed Wallace with a shepherd-like wisdom far beyond his 35 years. “There was something in those scenes with Howard, the intimacy of our faces unabashedly facing the audience. It’s something we all shared because it is a human story: Everyone has loved ones that have gone away. Everyone has forgiveness they’ve needed. And forgiveness they’ve given. And it’s all worthwhile. Every bit of it.

Outside the brightly lit music box of a recital hall and beyond the noise of the applause, a light mist fell. The Ozark hills of which Wright wrote so eloquently loomed silently, dark and unforgiving. But an early spring bloomed in the March night and, with it, all the magic of hope and forgiveness.

“It’s been a real labor of love,” mused Head, smiling, “and it’s been a long time getting here.”

DR. HAYDEN HEAD has been a professor of English at College of the Ozarks for the last 17 years. He and his wife, Sue, and their two children, Heno and Lanie, moved back to the Ozarks from Irving, Texas, where Hayden earned his doctorate from the Institute of Philosophic Studies at the University of Dallas. Prior to their move to Irving, Hayden and Sue worked with Hayden’s parents, Heno and Jane Head, who owned and operated Camp Soaring Hawk — located not too far from Monett, Missouri.

Since that time, the camp changed hands and is now known as Camp Barnabas. Hayden and Sue met there over 40 years ago. “Like so many Ozarkers, I love the story of Shepherd of the Hills! I’ve even had the chance to teach it a couple of times to my students in American literature. And I confess to a lifelong love of musicals. Thanks to Stan Beard, I’m finally beginning to hope that my love for musicals and this story will make it to the stage. I will never forget listening to Stan’s score for the first time — with tears in my eyes — and thanking the Lord that I could work with such a talented composer.” Thank you for joining in what has been a labor of love. Long live the Shepherd!

STAN BEARD is a musician, vocalist, arranger, composer, and often not one at a time! Stan has performed in concert halls in every state in the USA and in more than two dozen other countries. Appropriately enough, this Pennsylvania native began his career with renowned entertainer, Fred Waring and the Pennsylvanians, becoming the group’s youngest choral director at age 20. The stages and studios of California then drew Stan to a musical world that ranged from his tenure with The Carol Burnett Show, and tours with the likes of Ray Conniff and Doc Severinsen, to singing with Streisand and Sinatra.

His varied skills have well-served his long association with Disney on Ice, where has been musical director for more than three decades. “Just try directing Goofy in Mandarin Chinese, Aladdin in Dutch, and Donald Duck in Italian, without cracking up! I dare ya!” He has written or produced thousands of commercial jingles (American Airlines to Zenith TVs). Several films and TV movies carry his name right after the words “Music by…”.

Here in Branson, it has been 21 years since Stan composed the title song and score for “Listen to the River” to open Silver Dollar City’s Opera House. Since then his music has graced SDC’s productions of A Dickens Christmas Carol, It’s A Wonderful Life, Headin’ West, and the Living Nativity, as well as parades and other events at the park.

“Branson and the Ozarks remind me of my Pennsylvania roots. Not just the land, even more so, the people. What a joy to team up with Hayden in this retelling of Harold Bell Wright’s great story. I felt I knew many of the characters from my rural Appalachian foothills upbringing. Old Matt was Pop, my grandfather. I am honored to dedicate my work on Shepherd to his memory.”