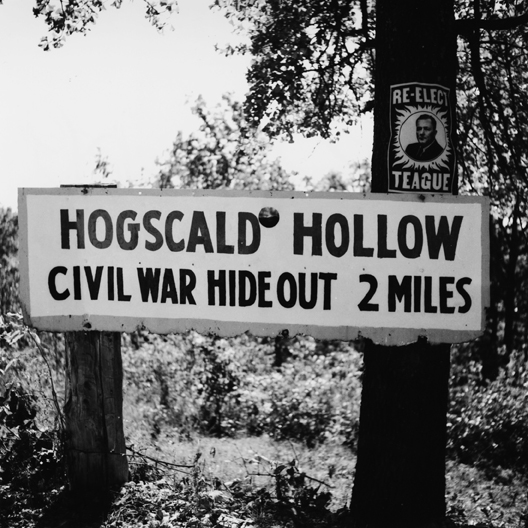 BY LANCE ESTEP WITH JOSHUA HESTON

During the fall of 2014, Lance Estep, a member of the Arkansas Archaeological Society and student at Missouri State University, was given the opportunity to conduct an independent study of Hogscald Holler near Eureka Springs for his Advanced Methods in Archaeology course. He worked in conjunction with the Arkansas Archaeological Survey and reported monthly to Dr. Jamie Brandon, head archeologist of the Fayetteville Research Station.

However, Estep’s journey to Hogscald Holler is a personal one, shared here:

My father passed away in the fall of 2010 and I inherited a trunk of old photos and documents — things that could have just as easily been thrown away. One of those was an army-journal-turned-family-scrapbook written by my great-great grandfather, Reverend William Martin Weatherman, Jr. The old ledger was a real curiosity with 140 pages of newspaper clippings, soldier poems, doodles, church programs, obituaries, sermon notes — and even hourly weather information for the entire year of 1891!

Growing up, I never knew much about my great-great grandpa except that he had been shot in the face during the Civil War, grew a long beard to hide the scar and that he was a traveling “sin-buster.” Within minutes of searching online, I came upon dozens of stories about him — and his connection to a place called Hogscald Holler. I contacted a member of Ancestry.com who had the Weatherman family tree, only to learn she was a cousin! In the spring of 2011, I met her 80-plus-year-old brother in Clifty, Arkansas.

He has heard my great-great grandfather preach at Hogscald Holler and he showed me how to get there.

Upon witnessing the other-worldly beauty and serenity of the place, I became concerned about its well-being and future. Just a few hundred yards beyond the old church grounds, there was graffiti, broken glass, beer cans, rusty fish hooks and worse. I vowed to do whatever it took to protect this place and others like it. I returned to Missouri State University — after a 20-year absence — to study archeology and joined efforts with the Ozark Regional Land Trust (ORLT) as they had set up 10 acres of Hogscald as a nature preserve.

Over a four-month period, I amassed 355 pages of historic photos, news articles and maps. I wrote another 100 pages of detailed notes and spent nearly 200 hours doing on-site survey work. I met several cousins and made many new friends, including Jim Two Feathers (a Muscogee-Creek-and-Cherokee Indian), who lives there.

Hogscald Holler derives its name from a short section of creek bed with rare depressions variously called potholes, scalds, vats or kettles. Early European pioneers used these natural “kettles” in which to scald razorbacks — or wild Russian boars — that had been introduced to Arkansas by Hernando De Soto in 1541. By the 1850s, thousands of hogs ran wild in the countryside.

With its multiple springs, waterfalls and caves, Hogscald was said to be a healing ground where even warring tribes met in peace for fear of disappointing the Great Spirit. The same would be said of the Yanks and Johnny Rebs during the Pea Ridge Campaign. According to Arkansas author Cora Pinkley-Call, Union and Confederate troops camped together at Hogscald, trading in peace. The rock shelters along the winding creek banks were used as cattle barns, food storage and even makeshift barracks. During the war, the place became known as the “Confederate Kitchen.”

Soldiers diverted cold spring water around the kettles by building small rock dams. Then fires — outlined with rock — were built beside the holes. Once the adjacent stones were hot, they were kicked into the holes, thus heating the water to scalding temperatures.

Fred and Ethel Todd, authors of Clifty and the Two Hillbilly Kids Growing Old,note the temperature was just right when “the water was too hot to dip your finger in more than twice.” Just below Hogscald Falls is Dead End Canyon, an ideal place for corralling animals. After the corralled razorbacks’ throats were cut and they were bled out, the animals were scalded in the creek to loosen the hair and prepare the carcasses for butchering.

Two of the holler’s rock shelters later served as a brush-arbor-style church yard from 1880 to 1930. A two-story stone outcropping known as Preacher’s Rock was chosen as the pulpit. The shelter below the rock served as a choir “loft.” The congregation sat in the opposing shelter. Bluff Church, it was called.

Wild ferns and flowers adorned this church yard. With the tumbling chorus of Auger Falls, melodic songbirds and the scent of honeysuckle thick in the air, it seems an experience with the almighty Creator was all but inevitable.

The place is so beautiful it is little wonder why folks would travel for miles every week to hear Reverend William Martin Weatherman, Jr. — my great-great grandfather — preach from the Good Book. The Sonora Correspondent reported, on August 21, 1903, a gathering of 700 for one of his sermons.

My great-great grandfather was born near Terre Haute, Indiana, on July 8, 1846. , He joined the Federal Army on November 18, 1861, at the tender age of 14, and served in Company G of the 57th Indiana Preacher Unit. He survived 10 of the bloodiest battles of the Civil War, including Shiloh, Stones River and Chickamauga. In the Battle of Franklin, Tennessee, he was shot in the face by a musket during General Hood’s infamous picket charge. A large portion of his lower jaw was blown off and he was left for dead.

Regaining consciousness, he overheard a conversation between the field surgeon and the commander of the day. “Leave him be. This man will soon bleed to death.” Weatherman belly crawled to a dead wagon, tying himself to the rear bumper. Thus he was dragged for hours before soldiers noticed him. Placed him in the wagon’s front seat, he woke up long enough to tie a handkerchief around his jaw before passing out and falling backwards into a pile of his dead comrades.

At a field hospital, doctors sewed up his face with a rusty needle. The cannons boomed around him as he lay near death. By the time General Hood surrendered, Weatherman had developed gangrene. One of the sawbones took a red-hot poker and seared out the infection. William then contracted measles.

Against all odds, he survived. In 1873, he was ordained in Kansas. In the fall of 1874, he fled the Grasshopper Plagues and settled in a corner of Madison County in what is today Clifty, Arkansas, building a log cabin on the Madison-Carroll County line. The home stands today.

Jim Oliver of Revillo Ranch wrote that Weatherman was “a guiding light in the darkness.” Weatherman baptized Cora Pinkley-Call at Winona Springs. She was just one of hundreds of locals who grew up listening to his sermons. Pinkley-Call would write in her 1930 book Pioneer Tales of Eureka Springs, “The weather was never too hot nor too cold for him to saddle his horse and ride for miles and miles to preach his precious book, and I want to say while he is still living, that I know of no one man that has done more for the good of this country and its spiritual welfare than he.”

My great-great grandfather Weatherman was a non-denominational traveling minister who — for more than 60 years — met appointments in Indiana, Illinois, Kansas, Oklahoma, Missouri and Arkansas. A meticulous record-keeper, Weatherman noted he led no less than 2,000 souls to Christ. He joined the United Christian Missionary Society in 1920. His ledger also shows he made no more than $200 during his decades-long ministry.

He preached — not for fortune or fame in this world — but for future rewards in heaven.

“I went winter and summer through snow and rain, broke and cut thick ice to do my baptizing,” Weatherman recalled in a 1929 interview titled, Experiences of an Old Log Cabin Arkansas Preacher. “Often riding a mile or more in wet clothing with my socks freezing on my feet as I only had one pair of shoes and wanted to keep them dry.” If that isn’t religious fervor, I don’t know what is! He notes he would often take a fence post and slam it down lengthwise onto the ice, then venture out on the post first and “cast out large chunks of ice with my naked hands.” One woman was asked if she feared going into the freezing water. She answered, “Not at all. I looked forward to it.”

Once, the people asked if they could remain on their horses until the baptism as the snow was too deep for many to navigate!

As Eureka Springs grew from a small camp into a thriving city, Hogscald Holler retained its importance. The holler was known for its bee trees and the nearby valleys were full of sorghum mills. Pumpkin patches covered numerous hillsides. Honey hunting was a regular pastime for the residents of Carroll and Madison Counties while the pumpkins cultivated at Hogscald were said to grow to mythic proportions.

Writer Otto Ernest Rayburn said some of the real old timers asked if he had heard about the giant iron kettle once made in Eureka Springs. They told him it was so large the men hammering on one side couldn’t hear the men hammering on the other side! Trying to play cool, Rayburn asked what such a kettle was for. “Why, to cook them punkins from Hogscald, of course!” came the reply.