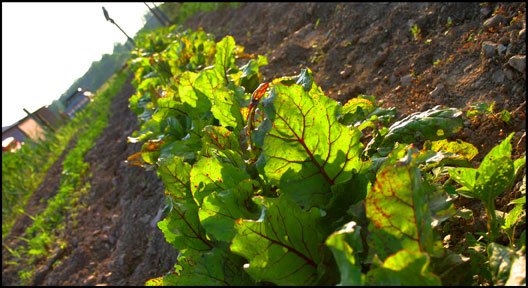 by Joshua Heston and Dale Grubaugh.

As with many fruits and vegetables from old-time Ozark gardens, beets were brought to these hills — and to North America — by European immigrants.

The beet is a member of the Chenopodiaceae family, which, in part, explains the hard, crunchy-textured seeds (actually clusters of nutlets).

The beet, along with other crops like radishes, mustard, or turnips, get little attention these days. And the blandly flavored cans of beets — commercially grown and packed — do little to make the lowly beet stand out.

However, there is a reason this root crop was domesticated millennia ago. Good cultivars, grown in quality soil, take on an amazing flavor. Earthy, deeply satisfying, and a blood-red, beets like Early Wonder, a pre-1811 heirloom, stand out in the garden and on the table.

We planted the Early Wonder variety in the dark of the moon (to promote root growth) on April 14 with a July 5 harvest.

Beets tend to grow slowly compared to root crops like radishes. The crimson veins in the leaves are mighty pretty, reflecting the flesh of the root, which turned out to be extremely tender and mighty tasty.

We sowed this crop too close together (beet seeds are best planted 4-6 inches apart) and that, along with a dry spell, most likely contributed to our late harvest date. Early Wonder usually matures in about 50 days.

We pickled and canned most of the crop and they turned out extremely well.